The Montreal Impact have made it official that it has signed Uruguayan forward Santiago Gonzalez via Discovery process.As per usual, the deal will be finalized upon receipt of his international transfer certificate and visa. But the Uruguayan will be travelling with the team to Florida.

Santiago Gonzalez is a young forward at the tender age of 21 and has played a total of three years with Institución Atlética Sud América. Playing in Uruguay's first and second divisions, Gonzalez also represented Uruguay at the 2009 FIFA U17 World Cup in Nigeria. 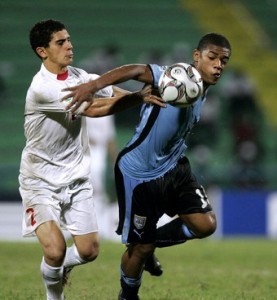 Santiago is a young striker that has already played three professional seasons. He is a dynamic forward that moves very well and can play with his back to the goal. It will take a bit of time to adapt, but I think he can bring a different element to the team.

As a special discovery player, the Montreal Impact save money and a designated player spot for future transfers in the near future. Until then, Gonzalez represents more than an option off the bench if the club went through a long process to acquire him.

Whether it's alongside Marco Di Vaio up top or as an advanced winger, Frank Klopas has more flexibility to his offensive portfolio. Just in time before the 2014 Disney Pro Soccer Classic in Orlando, Gonzalez will have time to get acclimated to his new club ,surroundings and club culture.

Adaptation time, effectiveness on the field and level of play can only be determined with time. But suddenly, the pre-season tournament has just taken another turn for the Impact as Klopas and his staff have more tools and toys at their disposal.