Individuals errors, group mistakes, mental breakdowns can help explain the 4-3 Montreal Impact loss to the Colorad Rapids. What about actually looking at what the Rapids did better in the midfield.

Dillon Powers was among the 11 players ( +3 subs) that shocked Stade Saputo and taking all 3 points against the Montreal Impact. Some will blame Davy Arnaud for losing the ball in the last seconds of the game, others will blame the referee. Something for sure is that the Impact coaching staff has been dissecting the game play by play to see how the Colorado Rapids smothered them at home.

Even at home, the Montreal Impact have gotten used to a stronger first half with ball possession and shots on goal. Early in the game, the Colorado Rapids showed that it was not here to sit back and wait for Marco Di Vaio and co. to stroll around.

At the end of the first half, the Rapids had more of the ball possession than the Montreal Impact. Ball possession does not describe how effective was the Colorado midfield , especially with a short passing game.

Taking a play out of the Impact's playbook, on many occasions, the visitors were able to stretch out the home team. Taking advantage of lackluster defensive performances from Andrea Pisanu and Andres Romero, more pressure was on Patrice Bernier , Hassoun Camara and Jeb Brovsky to defend more.

If you observe both heat maps (above and below), you will see that Bernier was basically playing against 2 opponents at all times. The heatmaps for Andres Romero, Andrea Pisanu and Felipe Martins can be found here. You will conclude all of the three midfield players have had little impact on the middle of the pitch or even the sides. This put more pressure on the center of the field and in this case Bernier.

Many times, Dillon Powers was finding space and time between the lines, between Bernier and the Nesta-Ferrari duo. In a more offensive role, the Rapids midfielder was taking advantage of bigger space given by the Impact. Sturgis was also huge in this game with 73 successful passes. 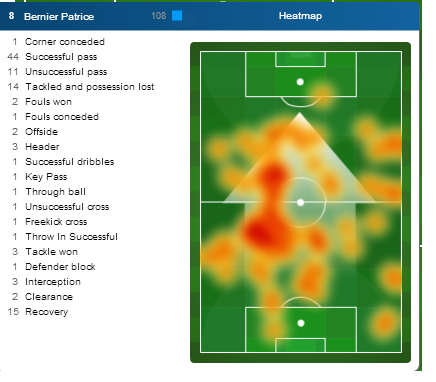 Via MLSSoccer.com's Beta Match Center Golazo , the most telling statistic is the Rapids efficiency in the final third. Spending more time in Montreal's half not only frustrated the supporters in the stands but also Marco Schallibaum.

I also saw a team that made some individual mistakes that cost us some points, but that’s part of the game Marco Schallibaum

A few times, the Swiss shouted instructions to Romero and Pisanu to get back defending and he shared that frustration during the post-game press conference. 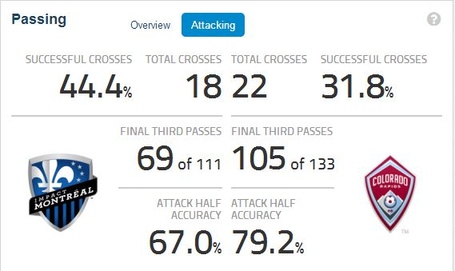 Attack Half Accuracy: The percentage of passes completed between players with the offensive half of the field.

Did the Montreal Impact show their biggest weakness to the Colorado Rapids? Is it time to look for a defensive midfield? Is Davy Arnaud the answer and will he be enough? Hassoun Camara?
As the July transfer window opens on the 9th in MLS, the Impact might be making some interesting moves to bolster the squad to keep the pace in the Eastern Conference.