Tagged as an older team with slow legs at the back and in the middle, the Montreal Impact were able to ''survive'' in the ''hostile'' environnement of CenturyLink Field.

Road Trip Blues no more? At least for the start of the season, the spectre of losing on the road with last-minute goals is put away for a while. Beating Seattle at home is already a feat by itself for many MLS teams but under a new head coach with his own ideas is a bigger bonus.

Formation, Formation....: Actually It's about Movement and Keeping It Tight 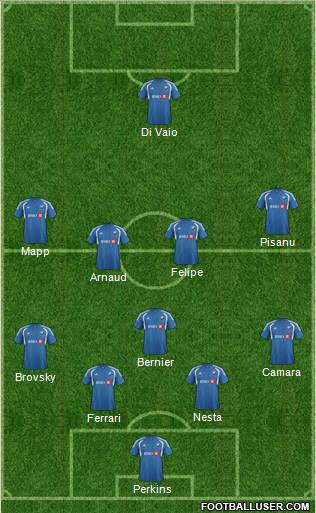 It was the exact same formation with the same players when the Montreal Impact beat the Columbus Crew at the Disney Pro Soccer Classic.

Defensively, the back-line deserves praise for a strong performance including 20 interceptions in total. Nesta and Ferrari displayed poise and smart positioning against Seattle's speedy offensive players. Even though the duo had some tendencies to move back on some players and plays, many pre-emptive defensive manoeuvres were successful. On the left Jeb Brovsky was his typical no non-sense, hardworking player with a good performance overall. Hassoun Camara was easily one of the most noticed player on the pitch with a strong performance offensively and defensively.

Behind a good defence is a good goalkeeper and Troy Perkins was perfect throughout the game. Credited with 3 saves, it could have seemed an un-eventful game for the Ex-Timbers player but the constant attacks from the Sounders kept him on his toes. Not credited as saves but his punched clearances on free kicks and corner kicks were as good as Saves Of The Week for a club that has struggled on the road. 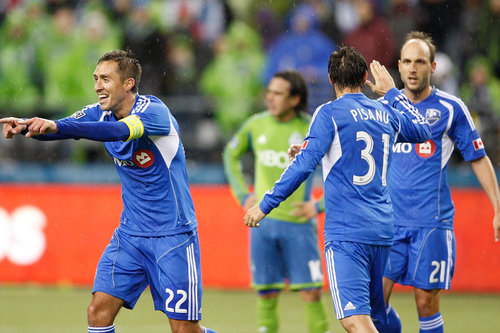 Extensive Quotes From the Montreal Impact

The Sounders played a lot of balls from the sides with Martinez and Zakuani putting a lot of pressure on Camara and Brovsky. Yet, there was some outpacing but not that apparent in scoring chances with Nesta-Ferrari taking care of business.

The midfield was more dense in numbers, had a bigger presence and create more movement. Whether it was movement with the ball, off the ball and passing, the Impact's intentions was to find each other quickly. Stretching out a porous Sounders defensive mindset was a success even with only 1 striker. The strike power was to also come from the midfield as we will discuss in the next section.

More on the midfield and the attack next.

Yes Gegangriff or Counter-Attack in German and that was the game plan for Marco Schällibaum from the start. Facing a quality team, the Swiss coach densified his midfield with 5 of them. Davy Arnaud re-positioned as a CMF did not change his eagerness to go up and that actually applies to all 5 midfield players.

With some initial drama around Patrice Bernier's new positioning as the ''lone'' defensive midfielder, Bernier was taking many runs up front in the second half. As the game opened up and Osvaldo Alonso's absence, Bernier found it easy to speed up through the midfield. Let's be honest, Bernier made it look easy as it was very difficult for any Sounder to take the ball away from him.

Andrea Pisanu and Justin Mapp had the wings to cover and create from. The American was unsurprisingly disappointing even if he had a couple of good runs to create dangerous chances. But after a couple of bad passes that create dangerous chances for Seattle, Mapp was subbed during the half. Pisanu had a good game showing that he used to play Serie A/Serie B soccer. Having more minutes and MLS experience will be key to evaluate him even more but his connection to Di Vaio is apparent.

Felipe Martins was positioned as the the playmaker of the team but was subdued throughout the game but made it count with beautiful pass on Arnaud's goal. There was a strong man-marking early on Felipe especially by Andy Rose.

Attacking wise, Marco Di Vaio had 1 great chance from a Pisanu pass inside the box but spent a lot of time going down the field to get balls. He obviously does not have the pace to play 90 minutes at full speed even against MLS defenders. But the midfield overload is the key and tactic for the Impact to generate goals, or at least create a numerical advantage.

Arnaud's goal started with Di Vaio getting the ball in the midfield from Pisanu. Including Arnaud, who made a intial call for a through pass right away, Pisanu, Mapp and Felipe ran up the field to propose solutions to Di Vaio.