A rivalry game that finally felt like one as the Montreal Impact won with pain and some style against Toronto FC. Patrice Bernier confirms that he is too cool for school and Di Vaio scores a classy goal from a classy Davy Arnaud pass.

Whether refereeing had an impact on the course of the game or not is not the debate. But with 1 penalty kick attributed to each team, making things even does not make it right. I am still on the fence if Baldomero Toledo and his colleagues had a horrible day but that's for another debate.

As I planned to write this article, I have decided not to talk about the refereeing decisions on both penalty kicks. Mistakes or not, making things even or not, decisions were made. Outside mind-numbing decisions, Toledo and his crew did an OK job and my opinion would have been the same whether the Montreal Impact won or lost.

But still Hurt with Alessandro Nesta's injury during the game and for the season. No news yet on the extent of Nesta's but the Serie A veteran did confirm to the media that it did not seem to be long-term. Let's wait and see

The defensive shift afterwards showed yet again Hassoun Camara's versatility, that Jeb Brovsky is right-footed in case you forgot and that Matteo Ferrari is the important piece in the Impact's defense.Though, it did understandably take 10 minutes for the team to settle in as Toronto FC enjoyed dangerous and good possession.

Then, we talk about Dennis Iapichino or as he was called for about 45 seconds Iapichinooooo. Outside the foul in the box for TFC's PK and first goal, the Swiss left back was not convincing in the defensive zone showing difficulties to produce a clean first pass. But he has not played enough games in 2012 and important minutes in pre-season to fully evaluate him. What does your Spider Sense say?

Patrice Bernier is sowing again and again that his game was always there but still wants to remind any doubters that might still be out there. As a unit the midfield was moving around with Davy Arnaud continuing to push up when needed in a more central role, not playing as wide as he did in 2012. 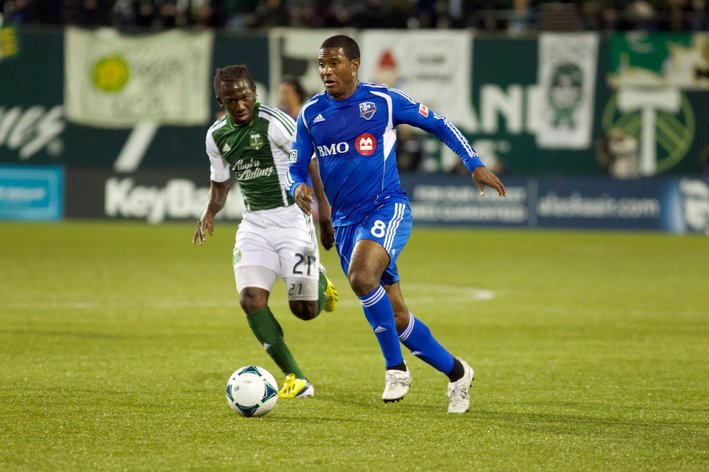 Bernier Among The Best in MLS Since 2012

Felipe Martins is still a shadow of his 2012 version but he has been getting better with each game and his passing success rate was at 70% against TFC. I have not noticed a specific man-marking on the Brazilian midfielder and he does not seem as comfortable with the ball as he was. Maybe he needs a big opponent like the New York Red Bulls to get his Joga Bonito level back at 100%.

On the sides, Andrea Pisanu and Andres Romero had the task to stretch out TFC while being able to feed Marco Di Vaio. Pisanu is more of a passer with legs that are older than his age as he was injury-prone throughout his career. He still offers a decent option to compose a strong starting XI but Sanna Nyassi will definitively be called upon whether as a starter or coming off the bench.

Andres Romero has finally played enough minutes for observers outside the club to see what he is worth. And he has shown some good smart runs and good ball control. His ''provocateur'' attitude to take on TFC's defenders was key to put pressure and stretch out the defense. Even though Pisanu was not as ''Latin'' in his ball skills as his Argentinean teammate, he was able to produce some space and combined well with Brovsky and Camara.

Marco Di Vaio is continuing to make smart runs as he did against Seattle and Portland. This time, playing at home and having more active possession definitively made the Italian striker look better. He still does NOT seem to want to slow down his runs but it IS his way of imposing faster passes from his teammates.

What About Toronto FC?

We had a good first half, but suffered a little in the second half Impact head coach Marco Schällibaum

All the good news is encapsulated in a sub-average second half that Impact coach admitted very early in the post-game press conference. Well, Toronto FC actually played a good game when you take into account 6-7 years of soccer desert. As expected, John Bostock and David Earnshaw had their say in different offensive phases for TFC. Earnshaw was alone upfront but was able to bring some danger as I was impressed with his speed and envy to continue to battle. Bostock has a dangerous left-foot and had a few crosses in that were handled by the Montreal CBs and Troy Perkins.

There was a TFC domination that lasted 15 minutes or so in which Dunfield, Bostock and Ephraim showed excellent chemistry, something that I hope can continue for Toronto.

Between the accusations of diving, fouls and benches talking to each other, this Montreal-Toronto game might finally be the ignition that this Derby needed.