Many runs, most of the ball possession and an excellent Justin Mapp was not enough to get all 3 points at Stade Saputo. Both teams, still on a winless streak, draw 0-0 in a game that could have gone the Impact's way in front of a solid Dallas defence.

Share All sharing options for: The Montreal Impact and FC Dallas extend their winless streaks with 0-0 draw

Both head coaches saw positives from the nil-nil draw between the Montreal Impact and FC Dallas. FC Dallas played the classical away game with little possession, a strong defensive performance and a confident goalkeeper. The Montreal Impact was able to put pressure early on the game but had trouble getting big chances to score that first goal.

FC Dallas has not lost once to Eastern Conference opponents this year. Whereas the Montreal Impact stay away from losing all 3 points from a Western Conference club since the 4-3 loss against the Colorado Rapids.

Even though his team extended its winless streak to eight games, FC Dallas coach Schellas Hyndman saw a bright spot in Saturday's 0-0 draw against the Montreal Impact.

With the players we left at home, the positive thing is that we are leaving here with a point. And right now, we needed something positive.

On the other side, Marco Schallibaum had a similar sense of pride for his players' performance, even though getting all 3 points was the main objective.

Our team was very strong-willed tonight.The will to win was there and we were very well-organized and solid defensively. After playing a game like that, we would have liked the win.

With most of the ball possession ( 61.5%) , the Impact were extremely active on the wings with Justin Mapp, MVP of the game, and Sanna Nyassi. Both players generated many chances from the sides as the Impact had 15 shots attempts and 26 crosses.

But a 15.4% of success rate in crossing for Montreal is more indicative of a strong Dallas back line with George John and Matt Hedges.

(Justin) Mapp had a tremendous game, by far the best player on the field tonight, I had some trouble stopping him but we did a good job dealing with their crosses. It`s just one of those games in which we dealt with what they threw at us pretty well. -- George John, FC Dallas defender

Justin Mapp : He is Baaack 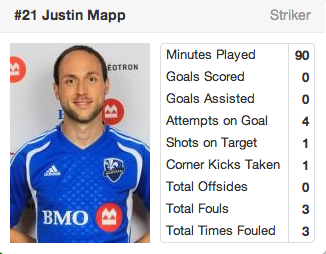 The left-footed midfielder has a busy night and kept Jair Benitez very busy. With a few incisive runs and a good chemistry with Hassoun Camara, Mapp was available and willing. His thundering long-range shot hit the cross bar and it would not have been a steal if it went in.

As seen below, Mapp's 3 favorite targets were Patrice Bernier, Justin Mapp and Hassoun Camara. All interactions were on the offensive side of the pitch. Only 7 of Mapp's 31 passing statistics were in the Impact's side which correlates directly with the ball possession. 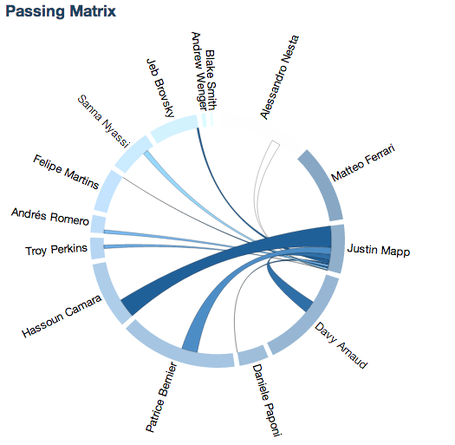 Meanwhile, FC Dallas did not seem intimidated and stayed united with a strong back line. The visitors almost scored and basically had the most dangerous chance of the game, if not the only one.

In the 36th minute, midfielder Je-Vaughn Watson headed the ball directly on Impact goalkeeper Troy Perkins, off a Zach Loyd cross. Loyd , who has some trouble to handle Sanna Nyassi in the first 20 minutes, was much better and it showed on that play.

Eric Hassli had a good shot on goal in the ninth minute. Getting his first start since mid-June, the French striker found space right outside the box, turned and took a low shot. Troy Perkins made the save and deflected the shot for a corner kick.

I am very tired, but I did what I could. Hassli said. "The objective was to stay united and contain them. We knew it was going to be difficult today.

FC Dallas goalkeeper Raul Fernandez was tested a few times en route to his seventh shutout of the season. He deflected Daniele Paponi's curling shot in the third minute, one of his four saves.

20,801 fans were at Stade Saputo, the first sellout this season of the year, and they definitely were the 12th man on a beautiful night at Stade Saputo. Montreal is tied with the New York Red Bulls in the Eastern Conference and will play with a familiar foe and leaders : Sporting Kansas City.

The satisfaction of playing much better than in previous games is a good sign for Montreal. Between Justin Mapp and Patrice Bernier, the offensive spark might ignite with the potential return of Marco Di Vaio against Sporting KC.