Canada is getting ready for the 2013 Canadian Amway Championship. All four Canadian professional soccer clubs will compete for the Voyageurs Cup and a ticket to the 2013–14 CONCACAF Champions League

O Canada, The Home of The Voyageurs Cup. Spring has come and with it .... the Cup 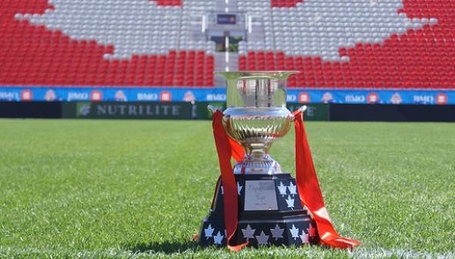 The road to the CONCACAF Champions League

The famous QF loss to Santos Laguna in the 2008-2009 CCL is a big part of the Impact's history. Do not expect the Impact to take the competition lightly. But with an imperative to win and make the MLS playoffs, Marco Schällibaum did confirm that Evan Bush will be the starting goalkeeper in both legs against Toronto FC. Could we expect a big turnover for the 1st leg of the semifinals? I would say some turnover as the club still puts an importance on winning, whether it's the Disney Pro Soccer Classic or the Canadian Championship.

It's nice to have an opponent who is willing to do everything to win. It elevates the challenge, but we are not afraid. We want to absolutely win the game. We respect them as an opponent and we know it won't be an easy first game. It's good to see them motivated. It means we'll have an exciting matchup.

With Canadian bragging rights in play, the quest for the Voyageurs Cup will have to pass through Toronto FC (again). The Club of the Queen City has mustered 4 straight draws in its last 4 MLS games. Winning would have been better for slumping MLS club but the Kevin Payne and Ryan Nelsen touch is definitively having a positive effect.

The 2013 Amway Canadian Championship features a four-team format with teams taking part in a two-legged home-and-away semi-final before repeating the same process in the final. The winning club will lift the Voyageurs Cup and earn the right to represent Canada in 2013-14 CONCACAF Champions League.