It was only a preseason game but Marco Schällibaum quickly wanted to implement his vision, tactics and intensity.

You play like you practice and the Impact immediately tested a new formation that Marco Schällibaum used in Montreal (during training camp). The club started in a 4-1-4-1 formation against Sporting Kansas City as we can see below 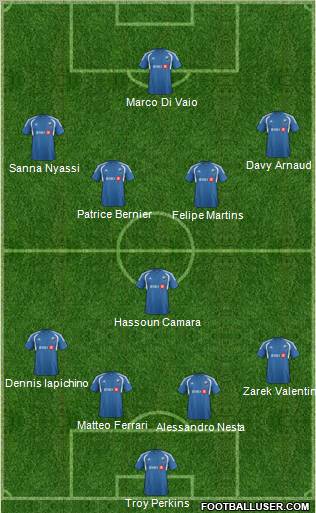 As previously mentioned in the post-game post, it was a difficult start for Montreal during the first 20 minutes. Whether or not one should put a lot of weight on actual performance is another debate. But so early in the preseason games process, the actual play, movements and intentions could be as important or more than the actual score.

The biggest change in game 1 of preseason was Hassoun Camara patrolling the space right in front of the central defense, what I used to call in 2012, '' The Joel Lindpere Zone''. Was this positioning to give more offensive freedom to Patrice Bernier or gap that defensive zone with a physical presence?

The answer could easily be both as Schällibaum has advertised ,since his first press conference , that offense will prevail. Recognizing Bernier's talent ( what a pass to Marco Di Vaio) and Felipe offensive potential will be key to the club's success.

That success will also come from the sides and we saw against Sporting KC, a much more accrued intention to implicate both right and left backs throughout the game. But let's not lie to ourselves and claim that the new coach metamorphosed the club right away. It will be a work in progress and a lot of work is waiting the club to mature into a more complete style of game, like Sporting KC has shown.

Matteo Ferrari, The Rock At The Back

The Italian defender has been the most pleasant surprise of all of the Montreal Impact signings, for someone who sneaked in the middle of the night at training camp in LA back in 2012. Outside an unlucky injury against the Seattle Sounders, Ferrari contributed in minutes and games played bringing credibility to the Montreal defense.

Against Sporting Kansas City, he was the most active player, taking away the ball aggressively but cleanly on more than one occasion. Yes, there is the Italian legend named Alessandro Nesta but the more important of the two will be Ferrari. Combining a sweet spot of age, experience and fitness, he is definitively a big piece in the club's chess game. 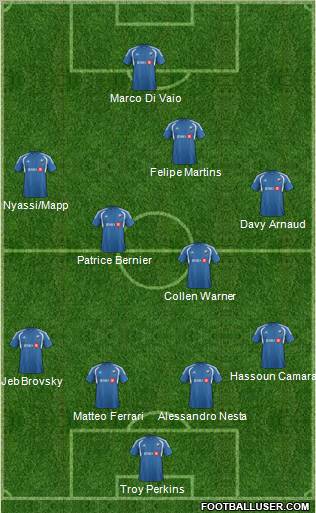 That would be a ''back to default settings'' formation for the Montreal Impact. Whether we will see those exact players is another story but it represent a more ''conservative'' formation compared to the 4-1-4-1 in which more defensive responsibility is put on the shoulders of Camara.

Outside formations, the good news is that both the main strikers of the club, Marco Di Vaio and Andrew Wenger, scored in the team's first preseason game. It's important to have Di Vaio in top shape to start the season and going through a full preseason with the club for the first time could prove crucial for both player and club.