Post Game Hangover: The Good, The Bad and the rest

As much as the team wants to and will move along and focus on the Colorado Rapids, there a few lessons that can be learned and un-learned from the game against New York Red Bulls. This loss seems like a hangover for club, team and fans alike as different emotions were felt during the game as if one was going through the 5 stages of grief as soon as the NYRB took the lead in the game (soccer grief in this case, no offense is wanted here)

The club as a whole has kept its head high no matter what and this not only a sign of desperate optimism and false expectations. From Joey Saputo to Matteo Ferrari, the good vibe around the team and the club has continued its momentum througout this city with a promise of real home opener at Stade Saputo and a fight till the end for the 2012 MLS playoffs.

Phase 1 of our season is over.Thanks to all supporters and partners of the Olympic park. Ready for a week full of announcements. Stay tuned!

On their recent form

We were NOT so WELL in the last couple of game, but Thanx God cause the season is so long..

and their fight till the end

I hope Im NOT the only one that i still believe in the playoff..

We will look at a couple specific player performances that I wanted to focus on here. Miguel Montano was an interesting subject just for the fact the Jesse Marsch decided to start him as he was barely on the 18-man roster for the past few games. Joel Lindpere quickly caught my attention during the game as he was not necessarily heavily present statistically but his impact on the game was more than efficient. 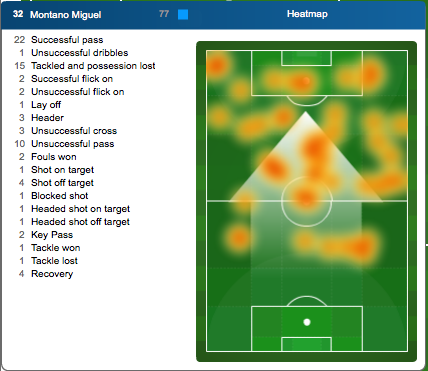 The 20-year old Colombian is an interesting prospect for the Montreal Impact. Officially a forward on the roster, the young Colombian has also played at the midfield and has shown that in the game. Technically skilled and seemingly physically ready for the MLS, his first half was a bit disappointing but only Davy Arnaud has really gelled with Bernardo Corradi upfront. He picked up his game in the second half which coincided with Jesse Marsch switching from a classic 4-4-2 to a hybrid 4-3-3 with Nyassi and Montano on the side and Corradi upfront as usual. This gve some breathing room to Miguel Montano as he had more space to play on and run on as we saw on his almost breakaway that saw his shot go wide on Ryan Meara's goal. The heat map above shows his play scattered around with a tendency to cut to the middle.

Miguel Montano has showed good things on the field, especially when he only gets his playing time with the reserve team and during practice. Obviously a hybrid player (striker/midfielder), the tactical switch to a 4-3-3 , hat better suited Nyassi and Montano , might open up a permanent tactical change to the team. But at the end, a formation is only as good as the players on the field and how they are utilized and capable of. The good news is that Jesse Marsch made some changes on the fly with what he saw on the field and shows his versatility when needed. 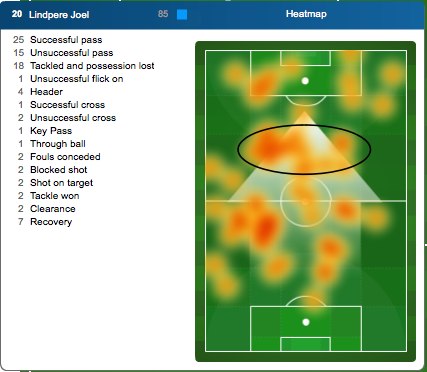 The Estonian attacking midfielder is in his 3rd season with the New York Red Bulls and has probably been the main catalyst in NY's 5-game winning streak, especially since he switched from a left wide position to a more central position. NYRB as a team pressed the Montreal Impact very hard on almost every ball in the first half, a very important point as it explains the 1st half of the game. The heart of Montreal's offense is Felipe-Warner where everything starts and the game plan for the Red Bulls was to press them as high as they can anda s quickly as they can. That plan worked very well and Lindpere enjoyed some freedom on the field with that.

Throughout the game (mostly before the red card), Lindpere made himself very hard to mark as you can see in the encircled area in the heat map above. He found himself in the gap between the midfield and the defence of Montreal veyr often something that I noticed watching the game from the stands. Neither Felipe nor Warner really marked him and Kenny Cooper did a good job to occupy Nelson Rivas and/or Ferrari , giving more space to Lindpere. It was really interesting to see him play as he quickly caught my attention and was present for a key pass for NYRB's second goal, that was offside but the play was very well constructed: classic counter attacking.

Montreal defensive line should be one of the strongest in the league when you see what Ferrari and Rivas are able to produce with such little playing time together. Add Donovan Ricketts to the mix and you have a good combination for keeping the Impact in the game as long as possible.

Montreal's ability to generate offense from its strikers. The modo of the team has been to generate offense as a collective, which basically applies to 99.99% of all teams. But the dependency on Felipe Martins as the playmaker might hurt the team if the midfield as a whole has trouble finding the strikers upfront. Justin Mapp's absence is hurting the team as his creativity was important to the team but better for him to rest and be ready for after the break.