Warner suspended and Rivas out for the season , is it time for a formation change?

With one piece missing from Montreal's Bermuda Triangle, Collen Warner, Jesse Marsch has hinted towards going for a Di Vaio - Wenger duo. That duo was seen in the second half of the game against Sporting Kansas City and it has been a wish of many fans since Di Vaio joined the club.

Share All sharing options for: Warner suspended and Rivas out for the season , is it time for a formation change?

No matter what formation change is done or not, one thing that is being looked at by Jesse Marsch and the coaching staff: Pair up Marco Di Vaio and Andrew Wenger up front.

We will look at 2 basic formations but with in mind that Wenger will see more playing time next to Di Vaio. The 2-striker approach has been something asked by fans for a big chunk of the season. In defense of Jesse Marsch, the 4-2-3-1 formula was the spark and trigger to a much better second half of the season.

Even if it started with a controversial 3-2 loss to the Colorado Rapids, the new formation was the difference maker for the Impact. It gave and still gives both players and coaches a certain liberty in tactical choices, players placement and some balance between a crowded midfield and a thin attacking line.

The key to that change was to have Felipe Martins play one notch up and be that final link between the midfield and the attacking third. With only Wenger (Nyassi at first vs Houston at home) and then Di Vaio up front, Felipe had also the role of combining with the lone striker. He was also an anchoring for the side midfielders and Patrice Bernier who was more adventurous in the final third.

With Collen Warner suspended for the game vs Houston and Nelson Rivas out for the season, that formation will most probably need to change. As much as the 4-2-3-1 was flexible and dynamic, those features can only go far as the bench that you have and the type of players in it. Like for all formations, a deep or thin bench is a big factor in game changes and such.

At the end, formations and tactics will only go as far as the difference makers in a game. Some of them include pressing high and passing triangles but you also need the right attitude and the correct work ethic. 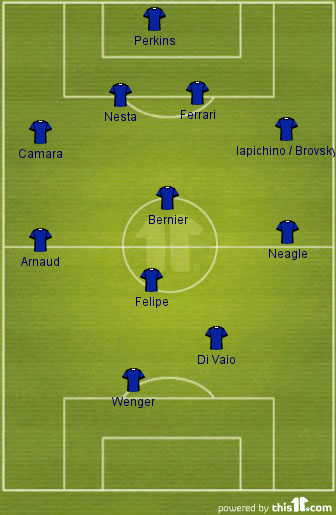 What you gain from a bigger presence in the box with 2 strikers, you lose in midfield volume. The Warner-Bernier-Felipe Bermuda Triangle was key but what is even more important is Felipe's freedom of play. The more involved is Felipe (more than 30-40 passes per game), the better it goes for the Impact. Now that teams are more than aware of him (Julio Cesar with Sporting KC), he does not have as a big impact as before. Still, his 2nd striker role was important in pressing and offering options. In front of Bernier and behind Di Vaio, Felipe will have a similar role but a bigger punch in the midfield, in the transition game.

Without Warner and alone in front of the back four, Patrice Bernier will have more defensive responsibilities. We can expect to see Matteo Ferrari be more aggressive with preemptive defensive strikes higher up on the field. That will help Bernier a lot and he will need to look for Felipe and the side midfielders faster.

The back four with 2 outside backs that will actually go up is important as per ball possession and scoring chances. Hassoun Camara has shown good qualities when he goes up and that will be key to help out Davy Arnaud. If Brovsky plays on the left, he will offer a more defensive aspect to the left back position compared to Dennis Iapichino. The choice between those 2 players might make a difference in some aspects of the game and it will depend on who will play opposite of them on that side.

Marco Di Vaio enjoys breaking off his Center Forward position and offer solutions at the midfield level and on the sides. By playing behind Wenger, the Italian DP will not need to make as many runs by himself and will probably reduce his offside count. Wenger will offer a physical presence but also a technical quality that always surprises me as I dont see him play enough.

With 2 ''play makers'' behind Wenger (Di Vaio & Felipe), the MLS rookie will be very happy to have such a good team behind him. 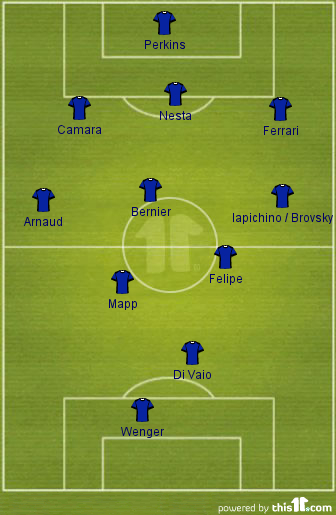 Offensively, the 3-5-2 focuses more on the side midfielders that can be real midfielders, wing backs or outside backs. The Di Vaio -Wenger association stays put and the midfield gets a bit more crowded with Felipe and Justin Mapp (for e.g). Arnaud stays in the same position as he is used to play a wider midfield/back role. Moving up Brovsky/Iapichino gives a higher defensive and offensive presence on the left side.

Association a player like Mapp in the CMF area is interesting as the left-footed midfielder might be more useful in the last third of the pitch than taking on a whole wing. Technically, he can manage that position but turnovers will need to be kept at a minimum as it will expose a gap between Arnaud and Bernier.

Defensively, personal player performances , stamina and endurance are key for the wingers/outside backs that will play all the length of the field. The Center Backs will have a zone defense coverage to cover the strategic areas but a defensive support as a group is key in this situation.

It will be interesting how the team will react to upcoming formation changes but at the end, it's all about attitude and work ethic as a basis to all.

Houston Dynamo 1 vs Montreal Impact 1 : The Impact are officially out of the playoff race