Thierry Henry's double too much for the Montreal Impact: Brave but not enough for Montreal

The Montreal Impact lost to the New York Red Bulls on a score of 2-1 at Red Bull Arena. Thierry Henry scores twice to give the Red Bulls a 2-0 lead. The Impact's DP, Marco Di Vaio, cuts the lead when he scores during injury time but it was not enough this time.

Share All sharing options for: Thierry Henry's double too much for the Montreal Impact: Brave but not enough for Montreal

Drama, heart-stopping situations and a double post gave a scare for the New York Red Bulls and a short-lived hope for the Montreal Impact to take 1 point away from NJ.

The hosts went after the visitors early in the game when Thierry Henry left-footed shot went past Troy Perkins' post. Henry finds space between Jeb Brovsky and Patrice Bernier in the transition as Johnny Steele feeds ''TiTi''.

In response, the Impact almost took the lead when Sanna Nyassi's thundering one-timer hits Luis Robles' crossbar as the Red Bull goalkeeper thought that shot was going wide. It was a nice play from Andres Romero who picks up the loose ball in the box. He then finds Nyassi charging towards the box but the crossbar was in the way.

Warning signs at the end of the half were felt when Juninho almost scores on a free kick on which Troy Perkins could not do much to save it. At the 42nd minute, the Brazilian midfielder takes a quick short shot off the free kick that grazes the post. 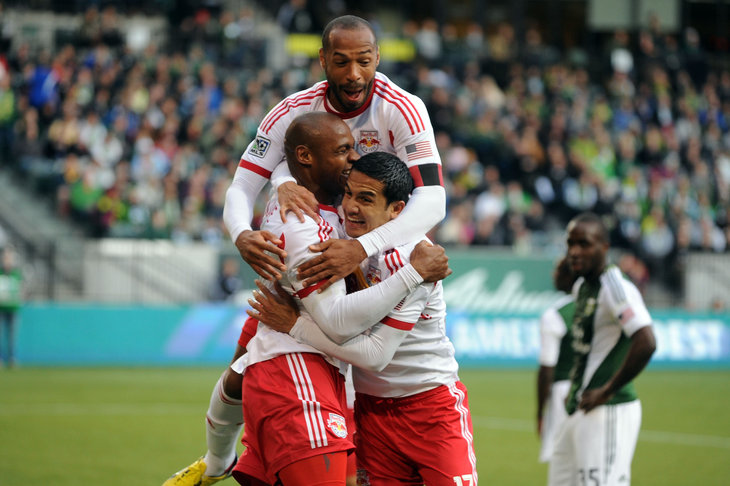 Game Preview with Once A Metro

If that warning was not enough for the Impact, Thierry Henry made sure to make the visitors pay right before half-time. Eric Alexander"s unleashes a powerful shot from his left foot that finds the crossbar. A funny rebound ensues as Fabian Espindola gets the ball and feeds Henry. Making sure to make it count this time, Henry slots the ball for the first goal of the game.

Psychologically, getting scored late in the half is probably the worst thing that could have happened. It showed early in the second half as the Red Bulls continued to attack the Impact's goal and once again Troy Perkins keeps his team in the game. The Ohio-native blocks Eric Alexander point blank header and pushes away Steele's heavy shot.

As the unwritten laws of soccer say, '' continue missing and you will get punished " . Thierry Henry read that book and delivered one of the best goals of the season so far. Off a Juninho free kick, Henry gets a ball off a flick of the head from Markus Holgersson. Instead of taking the regular route of going for header or control the ball, the magical genius of TiTi came out as the Frenchman scores off a bicycle kick that was both precise and powerful.

Coming at 66th minute, Marco Di Vaio scores the only Impact goal in extra time when he beats Robles with a perfectly placed on the run. Justin Mapp finds a streaking Di Vaio in the box after picking up a bad clearance/pass from Robles. Di Vaio gives a display of pure class and poise for yet another clinical finish.

Di Vaio thought that he had the tying goal when Justin Mapp delivers a cross at the end of injury time that Hassoun Camara. The central defender wins the ball in the air and finds Di Vaio in the box who volleys the ball with fury and intent. The laws of geometry play a trick and the ball hits Robles right and left post without crossing the line.

It was probably a good thing that the ball did not go in as Marco Di Vaio was offside on both Mapp's cross and Camara deflections, a situation that would have given more heart aches for the Montreal Impact.

It might not have been the best game for the Impact result-wise as unit but Les Bleus made it exciting. The unit is getting stronger and united and seem less and less impressed by any opponent, especially during away games.

Regrets will always come and haunt you if you look at Nyassi's shot off the cross bar and his 1-on-1 against Robles that could have had a better result.

As you wake up on this Thursday morning, the Impact are now 4th in the Eastern Conference with 17 points, making the game against Real Salt Lake on the weekend even more important.