Maxime Crepeau Signs a MLS Contract With The Montreal Impact

Share All sharing options for: Maxime Crepeau Signs a MLS Contract With The Montreal Impact

Youssef Dahha must be the happiest man with the Montreal Impact. Two out of the three keepers with the MLS club have passed through the goalkeeper coach. Evan Bush came with the club during its NASL years and Maxime Crepeau came up through the Academy.

It was just announced by the club that Maxime Crepeau was just signed to a Homegrown player contract. He will be joining 3 other Academy players he knows well, incluing Karl W. Ouimette, Wandrille Lefevre and Maxime Tissot. At the tender age of 18, Crepeau becomes the youngest player to join the Montreal Impact in Major League Soccer. He joined the Academy at the age of 16 while playing with the U21 team for the past three seasons. He is also the starting goalkeeper for the U20 Canadian National Team

Is the Academy gaining more ground to the NCAA and the MLS SuperDraft for the Montreal Impact?

Brad Stuver is part of the official MLS roster so we can assume that no MLS contract will be tendered to the 2013 2nd round draft pick.

Having the Academy Director and ex-U21 head coach Philippe Eulaffroy has accelerated the process of graduating a few Academy players with the MLS club. Youssef Dahha must be a happy man seeing his labor finally coming to fruition. 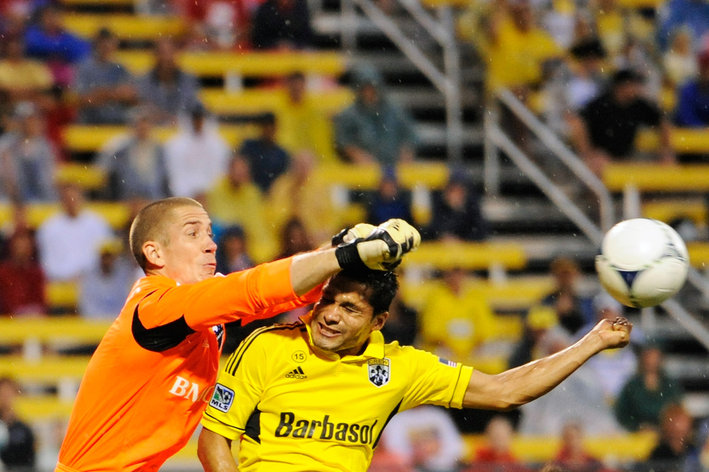 We are very proud to announce that Maxime has joined the team as our third keeper. He's shown over his time with us a maturity beyond his years and his performances at the international level have always been good. He has the potential to be a good player in MLS and he will be working with two solid goalkeepers (Troy Perkins and Evan Bush) that will help his development in all technical aspects as well as on how to become a true professional. I also want to congratulate Youssef Dahha for his excellent work with Maxime.

I am very pleased to be joining the pro team. I hope that this is the beginning of a long adventure. It's a dream come true following a lot of hard work. Now, I need to continue to work hard to further my development. I'd like to thank Philippe Eullaffroy, Youssef Dahha, Mauro Biello and all those who believed in me, trained me and helped me grow.