On loan from Bologna FC, Andrea Pisanu scores a nice goal for Montreal but D.C United ties the game via trialist Kyle Porter.

Share All sharing options for: Montreal Impact ties with DC United 1-1 and is off to the 2013 Disney Pro Classic Final

With a big core of starters on both sides, this preseason game was an intense affair on and off the ball.What could be the least ''preparatory'' game of preseason, coaches, fans and media had a good taste of MLS caliber in mid-february. With a first trophy at its reach, Montreal will play the Columbus Crew on the Final of the Disney Pro Classic on Saturday Februar 23rd.

Andrea Pisanu scores at the 16th minute with a spectacular goal even though D.C. United was pressuring high and keeping the Impact deep in its zone.

Kyle Porter equalizes late in the game at the 85th minute after massive substitutions by head coach Ben Olsen. With a strong domination in possession in D.C. United, the Impact's efficiency in front of the goal and compact game helped them in not conceding more goals.

There were a few scuffles and shouting matches during the game with a hot debate at the end of the first half between Di Vaio and the whole D.C. United defense. Later after a foul on Perkins on a corner kick, more tension mounted up, something the game's referee had trouble controlling throughout the game.

Great tensions in preseason is excellent news for Eastern conference rivalries, though we wish it was against Toronto FC. 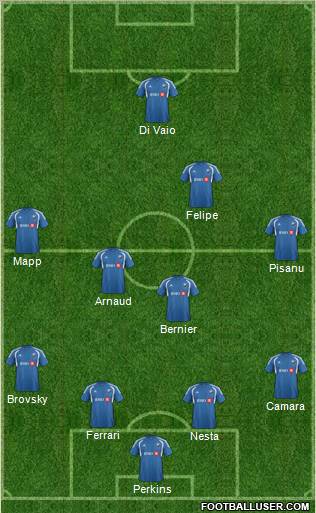 (*) The 4-1-4-1 formation was back as the starting formation (with a twist) with Marco Di Vaio playing as the lone striker. Different permutations were noticed throughout the game as Justin Mapp and Marco Di Vaio switched around a few times.

(*) Troy Perkins is in excellent shape physically and mentally and has shown to be in sync with his defenders. Excellent with the ball at his feet, the ex-Portland Timbers goalkeeper will definitively be part of the success story of the 2013 Montreal Impact, if success there is. It is a huge jump in quality compared to Donovan Ricketts, who did make spectacular saves but was not sound enough in his overall game.

(*) Felipe Martins is not as flashy as he was in 2012 preseason or season but we have seen a chemistry of 2012 still very present. That chemistry was and still is between Bernier , Di Vaio and Felipe. There were a few flashes of quick one-touch passing and fast breakthroughs that gives a positive vibe to the season.

(*) Hassoun Camara's versatile positioning is important to the club and gives different options and looks for Marco Schällibaum. As a midfielder, he gives more offensive freedom to Patrice Bernier. As a right back, he can fill out the role more than decently and give options to the whole defensive line. As a central defender

(*) The one-striker formation is not good news for the younger forwards on the club like Andrew Wenger. Though, the 2012 1st pick overall is the first option coming off the bench. It will be interesting to see the minutes he plays as the post-Di Vaio era is coming sooner than later.

- Andres Romero: Not a lot of minutes with the regular starters, the Argentinean winger/striker showed some decent runs, cutting to the middle a few times and offering himself as a passing option. Playing a bit more deeper than expected vs DC, I would like to see more of him.

- Eber: N/A . Nothing much to say about the Brazilian midfielder as he did no play significant minutes. Surprisingly, Eber is still with the team which might be a sign that he might be already signed (via loan for e.g.). Unless the Montreal Impact are still working on tactical and contract details, Eber is still here though.

We defended well and for the most part, we played a solid game, but it wasn't our best game. I'm not completely satisfied with the way we got this result. However, we have qualified for the final.

We want to win this tournament and we are now closer to our objective. It will be a good test for us since Columbus is a good team. The final will be a good stepping stone for our season opener on March 2 against Seattle. I want to have a good season with the Impact and help the team in what could be my last season.