After an excellent start to the game in which the Montreal Impact took the lead twice in 45 minutes and 30 seconds, another X-Factor showed its ugly head to change the momentum of the game versus the New York Red Bulls : another penalty kick open for debate. After a Zarek Valentin bad pass that lead to the 3-2 goal for the New York Red Bulls, the game was pretty much done, at least it seemed to be done mentally.

It was a game in which we saw the Montreal Impact score goals, able to dictate some of the flow of the game in the midfield while still showing some defensive solidity but it was not perfect as the 5-2 score tells the tale...or does it?

The momentum change was apparent after a bold penalty call by veteran MLS referee Michael Kennedy . Justin Mapp hints at that when talking about the second half but still takes keep a positive but realistic attitude as to focus for the Montreal Impact's next game against MLS royalty: Real Salt Lake.

I thought we played some of our best soccer of the season in the first half. We were a different team during the second half. They have good players and if you give them too much space, they will punish you. No excuses, we just weren't good enough in the second half. There is still a long way to go and now a quick turnaround for our next game Wednesday.

You can take out the man out of Arsenal but you can't take the Arsenal out of the man. Jesse Marsch said it the best when talking about Thierry Henry and how his team permitted him to have too much space which eventually was the doom of the Montreal Impact throughout the game. You can see on the MLSSoccer.com chalkboard how little unsuccessful passes he had in 90 minutes and where he was positioned on the field when making passes.

Thierry Henry is back on his favourite left side as he loves to do to challenge the right back and in the same offer support and solutions to 2 other players: Roy Miller the left back and Lindpere the left midfielder. Also with a 2-striker system, Kenny Cooper had more space but still suffered against a strong Matteo Ferrari and a more focused Tyson Wahl. With some passing in the midfield. Thierry Henry shows his portfolio of skills again, making it very hard to mark him: the challenge of mixing man-marking and zone defence. 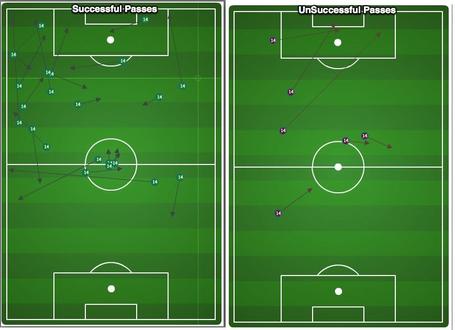 Patrice Bernier is the other half of the Felipe - Bernier midfield duo. After a disappointing game against the Columbus Crew (that saw Bernier only play 45 minutes), the Montreal native stepped up his game with 58 successful games and only 6 unsuccessful passes. A few of the successful passes were given to the back as you can see a lot of them were either going lateral or forward.

As I talk about and will still continue to, the Bernier - Felipe duo is key to ball control and distribution in the middle of the field. Some creative/offensive side (in the midfield) will also come from Justin Mapp and Davy Arnaud for the last attacking third but the importance of the holding midfield is important. Felipe and Bernier will not go up at the same time as one will join the attack and the other stays a bit behind. Their chemistry and understanding of each other is very apparent and both combine many times with quick short one-touch passes. Patrice Bernier released the ball quicker to his team-mates and felt comfortable transporting the ball, without over-extending himself. His experience is kicking in as expected by Jesse Marsch and his leadership beyond any captaincy and status in the MLS will come through. 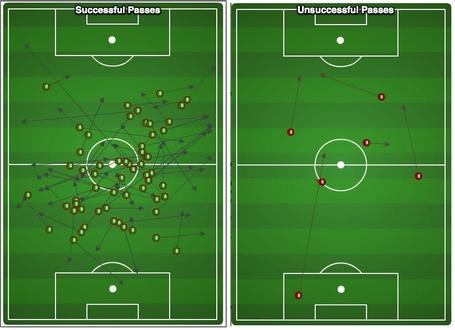 There are negatives to the game when you notice the space given to Thierry Henry (for e.g) or did he create his own space?

There are many questions as per what the Montreal Impact can do better as a unit and the players as individuals to avoid avoidable mistakes.But positives are apparent after an excellent first half by the Impact:

If you are pessimistic about the team's loss, that is understandable. Are you sceptical on the team's ability to evolve in defeat? How far can you evolve as a group if you are losing all the time? Jesse Marsch might have the same questions but as a team, a unit, a club and an organisation, there are important milestones that are being reached. It's up to the coaching staff to get the players mentally ready for the grind as they manage the road trip blues.
It might be frustrating to see a team play so well and lose 2 consecutive games before going to play Real Salt Lake but this is what a unit goes through together, during the good times , during the bad times and during the ugly times.