With 3 consecutive away games and an approximate total of 5350km (one-way), the Montreal Impact would have preferred a bit less drama and at least 1 point as they lost to the Columbus Crew 2-0. With 2 straight away games left before a Canadian derby vs Toronto FC at home, Jesse Marsch will try to maximize his squad to its full potential, rotate starting players and manage the players' efforts and minutes in practice and games.

A strong point of the current Montreal Impact was and still is its ability to build a strong chemistry and continue to be a unit on and off the field. With 2 games in 5 days and a 6000 km round trip from NY to Salt Lake City, fresh legs and fresh minds will be crucial. I will be an early test to an expansion team that has veterans that know and lived the MLS road trip grind and will need to help the younger less-experienced players to go through that transition.

Jesse Marsch did not just create a team made of template soccer players like one would via EA FIFA 2012 but selected individuals with character, mental strength to create a strong cohesive unit as they take on the rest of the league.

More after the jump 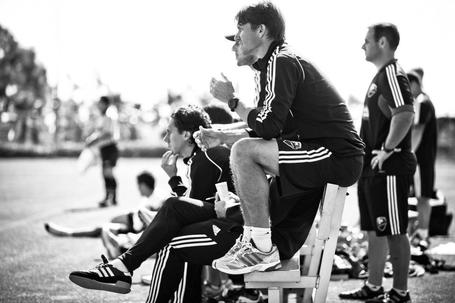 The Gap at Right Back

With Jeb Brovsky's red card and the midfield that was tagged '' crowded '' , we should see some more juggling in line-ups via practices and the games versus the New York Red Bulls and Real Salt Lake. In search of Brovsky's replacement as a right back, Jesse Marsch will have 2 viable options : Zarek Valentin and Calum Mallace .

Zarek Valentin is back from Olympic qualifiers as the U23 USMNT was disqualified from the qualifying tournament. Valentin is able to play both CB and RB making him a very flexible and interesting option in defence. Calum Mallace, a natural CMF/DMF, has been playing as a RB under Jesse Marsch although the head coach has opened the door to see him play in the midfield in the future: Both players seem to offer youth,speed and defensive toughness as the team looks to fill the gap at RB.

The crowd at midfield is actually a good thing for a soccer club. As much as you dont want to necessarily keep players on the bench all the time, having a certain depth gives you options within your system of play or to even change it on the fly with players that offer versatility in their skill-set. Collen Warner will see more playing time during the next 3 games (NYRB, RSL and TFC) giving breathing time to other players like Patrice Bernier and offer something different to the team. In the same time, it is also a chance to better assess the player that might look good in practice as nothing is better than an official game.

Many Montreal Impact fans have been waiting to see more of Mike Fucito , the sensation that came with Lamar Neagle via the Eddie Johnson trade to the Seattle Sounders. The Concord, Massachusetts native will be more than eager to prove to Jesse Marsch that he deserves more playing time and even earn a regular spot in the starting XI. He might seem to be more in competition with Sanna Nyassi with a midfielder/forward profile but nothing is better than good ol' internal competition to try to get the best from the players while still being to manage egos and personality.

Bernardo Corradi is the only direct competition to Justin Braun as a classical striker/centre forward. Both offer size, not the greatest of speed but still play the necessary physical game for the CF position. Justin Braun is important in the pressing strategy of the team, something that I don't see Corradi able to constantly do for 60-90 minutes but giving a breather to Braun would be beneficial to him. Offering a better technical package and experience , Corradi might get a start in one of the next 3 games and look for Andrew Wenger to see more playing time.

As an expansion team, the road to the MLS will be constantly filled with challenges and tests. You would like to see evolution in the team's spirit, game and cohesion. Physical preparation coach, Adam Rotchstein, will be very important in his role to help the team prepare physically (practice, nutrition , rest) to play 3 games in a span of 7 days.