Toronto FC Scouting Report:What has changed with The Reds since?

It has been more than 3 months since both clubs faced each other and a lot has changed since. With the bad memory of getting eliminated from the ACC and getting trashed at Stade Saputo, revenge is not out of the question.

Share All sharing options for: Toronto FC Scouting Report:What has changed with The Reds since?

Marco Di Vaio's first MLS game with the Montreal Impact was probably one of the worst starts for a D.P and player in general. With his friend Alessandro Nesta at Stade Saputo to watch his childhood friend play in MLS, it was not the best game to try to sell the club and the league to Nesta. Since then, Nesta signed with the club.

Looking back at that game, let's have a look at the formations on that day

Between injuries (Frings, Koevermans) and trades (De Guzman to FC Dallas, Hassli to Toronto FC), Toronto FC has changed quite a bit. A big core of the team is still there with the young players and some veterans but interesting to remember so many big blockbuster changes for a team that was in turmoil all season long. 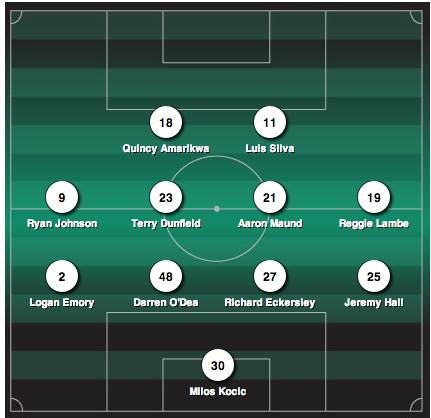 Even though O'Dea is probably out with an injury (from international duty with Ireland), the O'Dea-Eckersley defensive duo was very interesting to watch. Against D.C. United, the team shifted Ryan Johnson to the midfield and pushed Luis Silva up as a forward, something he is not un-familiar with. You might see Hassli play in this game with Amarikwa out with an injury. The French Designated Player, who came via trade from the Vancouver Whitecaps, is still recovering from an injury himself and might not start the game.

With Ryan Johnson suspended for the game against Montreal, it will be interesting to see where the firepower will come from the Reds. On one side, we might see an advantage for the Impact in the midfield sector but the absence of Felipe will hurt , putting more responsibilities on the midfield as a whole.

If Toronto FC is able to attack from the side and put pressure on the Impact side midfielders and outside backs, that might make life difficult for Montreal to build plays. Dictating the pace of the team outside Stade Saputo has not been the Impact's forte but still showed some good initiatives in a few games. The only hic would come from Montreal's inefficient rate in front of the net. The Di Vaio-Wenger duo has the tools to take on the TFC defence as a whole.