As the transfer window opened up on July 9th, the Montreal Impact are looking at different options to reinforce the team. Nick De Santis addressed the media, earlier this week, and shares his thoughts on where the team is and how he can help to improve it.

Share All sharing options for: The Montreal Impact looking to improve as Transfer Market Window Opens Up

As the MLS transfer window opened up on July 9th, the rumor mill has been quite busy churning news of big stars coming to MLS, including Toronto FC supposed interest in Diego Forlan. With the latest trade of Luis Silva to D.C. United for allocation money, Toronto might be looking to make big moves sooner than later. 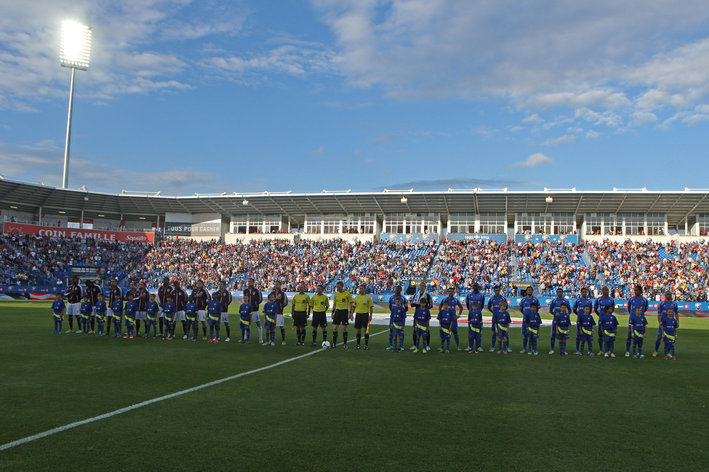 My Mid-Season Grades for the Montreal Impact for CJAD 800

For the Montreal Impact, Les Bleus de Montreal, the mid-season report has been more than satisfactory. Top of the Eastern Conference, the Impact has gotten better as a unit , mentality and physically.

With a much more attractive brand of soccer , at least at home, the character of the team has come up as the 12th man , if not the 13th man (apologies to the fans).

What happens next? Going through a win-less streak, that same character will be tested again. A Justin Mapp-dependence is showing itself but bench players like Collen Warner and Sanna Nyassi have given credit to the team's depth. I,myself, doubted the effectiveness of the Impact's depth but I seem to be proven wrong.

I still think that both Collen Warner and Sanna Nyassi could be trade baits, as both have good value on the MLS market. The good news is that both players understand their roles. Within their skill-sets, the Impact was able to help both flourish when they were called upon.

Window shopping? Only for one, two players who can really increase the team’s level Nick De Santis, Sporting Director

What we can deduce from Nick De Santis , is that the management is satisfied with the work of its coaching staff and players. With a core group and a strong chemistry, we should not expect a big overhaul of the squad.

Talking about one or two pieces, De Santis might be looking at a creative midfield solution, as requested by my CJAD 800 colleague , Grant Needham. You can hear the Soccer Gang of 4 talk Impact soccer during half-times of home games on CJAD 800.

Increasing the level of the team does not imply depth moves, as I predict the club might go for. Taking the club to the next level implies talented , effective players that can insert themselves quickly into an already tight squad. An international player would force the Impact into trades and/or waivers to free up international spots.

The usual suspects include Dennis Iapichino, who has been average at best but is close to head coach Marco Schallibaum. Nelson Rivas is also a delicate dossier as the Colombian defender has not played one MLS minute (due to injury) in 2013.

The transfer window is open and many players (and their agents) are pinging away at clubs all over the world. MLS has become an attractive market for many players. From the aging star to the role player, the choice is there but smart signings, trades and savvy ''capology'' are the obvious tools for a successful transfer market.

You tell me in the comments below