“When you play three in the middle, the opposition looks to clog that area'' . That was Mauro Biello talking to reporters during midweek practice following the 2-0 loss to Sporting Kansas City.

Share All sharing options for: The Impact Struggling in Transition Game even after 4 Wins Out Of 5 Games

Being predictable is a team's worst enemy and Sporting KC showed the Impact's weaknesses by clogging that midfield. A big chunk of the transition game has been assigned to Patrice Bernier and the Brossard-native has delivered. But Sporting KC has shown that clogging the options through the middle will not only hinder the Impact's transition game, but actually nullify it.

When talking to Guy A Lepage on TLMEP, Patrice Bernier talks about his new positioning (giving him a new role) and hints at his desire to have more freedom to go forward [offensively]. This is not the first time that Bernier is hinting towards playing higher up the field. His 2012 partner in the CMF was Collen Warner. Will Marco Schällibaum consider going back to last year's 4-2-3-1 formation or a variant of it?Formations are as good as the players you have and how they can produce and move around the field.

Bernier's position change has had an effect on other players , notably Felipe Martins.

The Brazilian midfielder is still feeling the aches of recovering from his sports hernia surgery. It explains some of his play but some numbers do speak for themselves. 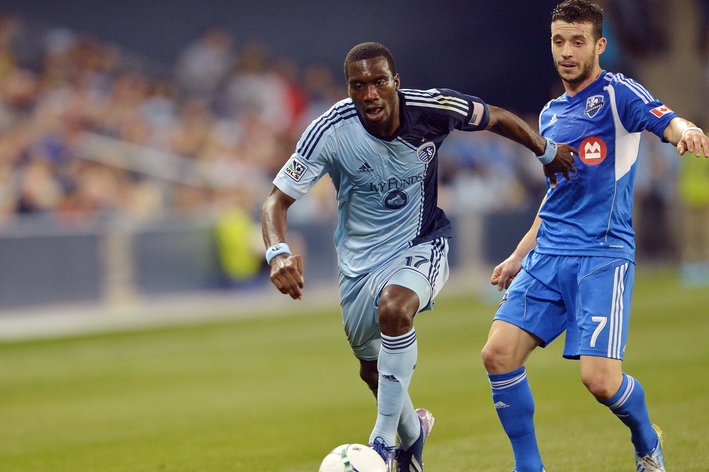 Still early in the season, Felipe Martins has struggled to be an impact player in 2013

Felipe has shown on the field that he is not as comfortable as he was in 2012. Does he miss Patrice Bernier playing higher up? In 2012, after the game vs the Colorado Rapids, the Brazilian midfielder was assigned the play-maker position. That gave him the freedom and versatility and literally made him one of the catalysts in the Impact offense.

With the scoring ability of Marco Di Vaio, putting the Italian striker in scoring conditions is key. The previous sentence is an understatement at best and obvious. There is a link between Felipe looking a bit lost on the pitch and Di Vaio finding himself alone and lonely up front.

Even at home, the Montreal Impact have shown to be gearing for counter attacks. Andres Romero has provided some needed speed on the wings but not enough has come from Andrea Pisanu and Justin Mapp.Even if it's early to expect Montreal to produce a complete game a la ''Sporting KC'', the offense coming from the sides is lacking.

That deficiency is making the team more predictable when you know that the outside backs will not pose a threat or no synchronized overlaps are expected. This maturity needs time and players to produce at a high-level on a regular basis. Having the choice of stretching out a defense to create space in the middle and vice versa is key. Though that quality was seen during the Impact's hot winning streak during the summer of 2012.

The Montreal Impact's depth is already being challenged with injuries. With the arrival of Daniele Paponi on trial, Montreal might be looking to add more numbers up front and make itself less predictable. The talent is there and it is probably premature but the team's depth is cause for concern to keep fresh ideas and fresh legs early in the season.