Three Center Backs in a Four-man Defense: Advantage or Dilemma

Share All sharing options for: Three Center Backs in a Four-man Defense: Advantage or Dilemma

With the depth at the center back position, Jesse Marsch has not had all of them available through injuries and suspensions. With Alessandro Nesta coming in the month of July, the options for the Montreal Impact got better. Giovanni Sardo tackled those options in a previous excellent piece that you can read here.

Before and after Nesta joined the team, we probably have seen at least a half-dozen of center back duos combination. And there is nothing that Jesse Marsch could really do about it. From injuries to suspensions (arguably deserved or not is another debate), the momentum to see a stable CB line seemed to always halt: unfinished progress. Like a painting missing its final brushes, the canvas (that is the Impact defense) was redrawn so many times, that one could be surprised that the team is still in the playoff run.

The Montreal Impact neither showed a natural eagerness nor the definite quality to play with offensive-minded outside-backs. Having a healthy number of Center Backs gives more options to coaching staff but each choice has its opportunity cost.

Having three Center Backs in a four-man defense is a tactical choice and is nothing new in pro soccer (arguably amateur too) . Like in everything in life (metaphysical isn't it?), every tactical choice has an opportunity cost. Not always tangible, that ''cost'' is something that you give away in return: positioning, ball possession in an area, style of play etc... . A coaching staff will prepare the team with the tactics, formation and strategies including expectations, strengths to push on and weaknesses to protect.

The heart of the defense was tagged as being Nelson Rivas - Matteo Ferrari but a third component came in to bolster the core: Alessandro Nesta. Whether Nesta was in the works for the Impact before Ferrari's and Rivas' injuries is another debate but a coach cannot just ignore quality players that are at his disposal.

The pure 3-5-2 system, that my colleague Giovanni was the first to promote, was probably too risky to switch too in the middle of the season. It is though a more than viable formation for next season. But whether you play a pure 3-5-2 or a strengthened 4-4-2 with 3 CBs, one issue still stands for the Impact. Even if it has gotten much better, the input of the outside backs has been minimal for a few game, putting a lot of pressure for e.g on the side midfielders (Davy Arnaud and Justin Mapp).

Already ''shy'' with the outside play via the outside backs, the Montreal Impact's defense has shown 2 different faces in its last 2 games in Major League Soccer action.

Jeb Brovsky is neither a natural right back or defender. A midfielder by trade, the Colorado-native filled in the right back spot (and the left back spot at times) very well. He always been a physical presence with excellent athleticism and strong positioning as the games went along. His offensive input into the game is not the most evident as he does not wander a lot past the midfield line. When he does, he quickly tracks back but you can feel that he wants and is able to make the runs all game long.

Dennis Iapichino is more inclined to participate in the offensive sector being a natural left back. With good speed, 1-on-1 skills and decent passing/crossing skills, I do expect Iapichino to be more and more involved in the offense though.

It's an improvement but with Felipe Martins as the free electron, the backs should be able to see more solutions offered to them. Davy Arnaud and Justin Mapp have shown enough to be able to combine with another player on the side but you can feel that more can be done. The Impact is still a new team and personnel changes and more time in the off-season will help into evolving, which is something the team has done. A lot of lateral and back passes for both outside backs with Iapichino more involved but the Montreal Impact has been very heavy on the left side whether it was via Lamar Neagle or Justin Mapp. Only 2 crosses into the box were attempted by both Iapichino and Brovsky. With Di Vaio at 5'11, crossing balls in ''a la Sporting Kansas City'' might not seem like a perfect tactic. Out of 42 goals scored, 5 were headers which represents around 12% of goals.

This is not a decree to cross the ball all the time as the Impact shows great poise and precision with the ball on the ground with a very technical team. 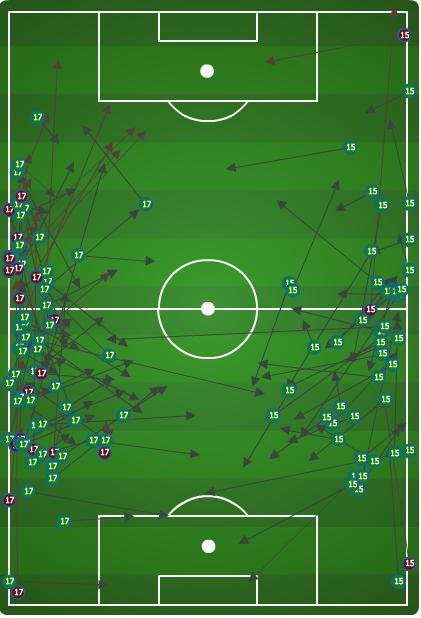 Columbus Crew vs Montreal Impact 2-1 : 3 Center Backs & 1 Outside Back

Brovsky and Ferrari were covering the sides against the Crew. Brovsky was a bit more adventurous than usual and his ability to adapt to any position makes him a valuable commodity. Ferrari took over as right back as Jesse Marsch had intentions to block ,as much as possible, Frederico Higuain. It almost worked throughout the game but the Crew took the win at the end. The story of the game is something else from the outside backs input. But with more ball possession on the sides, the Impact might have been able to keep the ball more at the end of the game.

Once again, the Impact made choices that made sense and worked very well while still understanding the opportunity cost of the choices made. 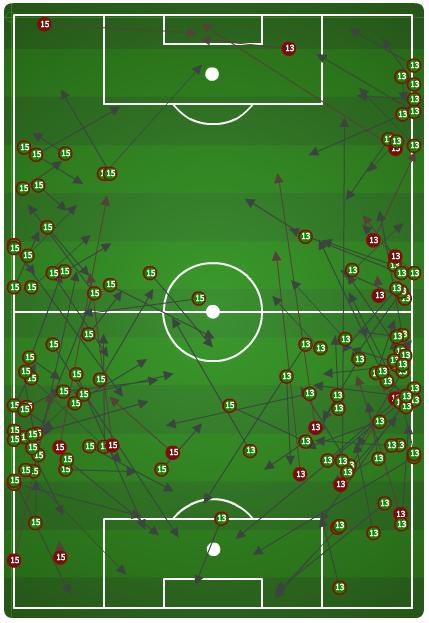 What is interesting is Ferrari's ability to go up and not just be stuck to Rivas and Nesta. He will not be the right back of the team but he still covered some terrain. The Impact had no intentions to play an unbalanced 4-man defensive line with a hidden 3-5-2 if Brovsky was asked to go up all game long. If Iapichino was started, we would have probably seen the Impact offers more solution on the left side but Marsch wanted to block the sides at all costs. 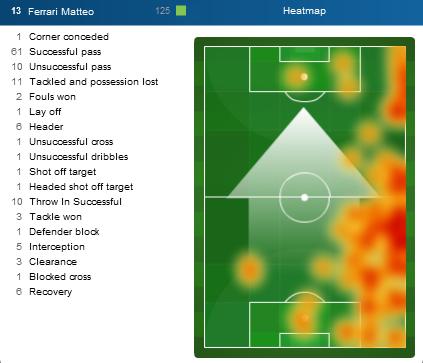 What is your take on the current 4-man defense situation in these games or before and after? The 3-man back line is viable option for next year with more time to prepare but tell us what you think.