Montreal Impact 3 vs San Jose Earthquakes 1 : A Statement to the Fans and to the League

Share All sharing options for: Montreal Impact 3 vs San Jose Earthquakes 1 : A Statement to the Fans and to the League

19,431 fans showed up at Stade Saputo and thousands more tuned in to TVA Sports, twitter and the official Montreal Impact smartphone app. It was arguably the most electric atmosphere at Stade Saputo in which an eventful game was unfolding upon the soccer-smart masses.

The Montreal Impact have been in full throttle playoff mode for over a month and the team is on a roll with four consecutive wins. Beating the San Jose Earthquakes 3-1 confirms the fortress status of Stade Saputo and the importance of the home crowd. If we talk talk fortress, we must mention the war-like game that saw red cards being distributed like candies.

Chris Wondolowski scored in the 23rd minute off a penalty kick but Marco Di Vaio replied two minutes later to get the team back in the game. Lamar Neagle steps up to the plate after a long period on the bench and scores on the 61st minute. Patrice ''Joga Bonito '' Bernier finishes off the visitors at the 72nd minute via his trademark PK.

Even though we saw 4 goals in the game, the main topic of discussion was the '' friction '' between Hassoun Camara and Steven Lenhart. At the 21st minute, both starting to swing at each other in the box and were both sent off. A PK was still called for San Jose but it's still confusing what really happened there. Camara and Lenhart were at each other's throats early in the game as both enjoy the physicality of their respective position but no one expected a '' fight ''.

One thing for sure, playing 10 vs 10 seemed to level the playing field for the Montreal Impact as the hosts were not shaken up. Like Jesse Marsch says '' We continued to move along ''

Even if I have been watching North American soccer for over 10 years, I seldom surprise myself talking playoffs and playoff atmosphere in soccer/football. The Impact fans , from the walk-in fans to the Ultras , felt the energy coming off the players and gave it back ten fold. The electrifying atmosphere was playoff-like and this might be the turning point /selling-point to establish Major League Soccer and the Montreal Impact as the summer professional sport entertainment in Montreal.

Società Azzurra is a group of Montreal Impact in section 119, with an italian flavor but open to all. Created by our own Giovanni Sardo, the group made a great class-act tribute to Kirk Urso that caught the attention of fans and media at Stade Saputo. 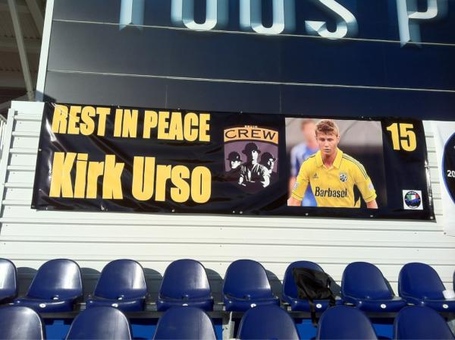 Even though the CalcioScommesse is still looming over the Montreal Designated Player, Di Vaio was rewarded by his efforts and played a complete game. Dangerous before the red cards incident, Di Vaio was finding a lot of space behind and around the Earthquakes defense. Connecting very well with Felipe Martins, the Italian striker tapped in a pass in the box from the Brazilian for the equalizer. He then got a '' PK-assist'' as he found space behind the SJ defence only to get pulled down in the box by Jason Hernandez, who got red-carded.

Marco Di Vaio was subbed off the game at the 74th minute for Andrew Wenger, under a grandiose, heart-felt ovation at Stade Saputo.

'' Here he goes again, talking about Felipe-Warner-Bernier '' . I hope that is not an inside voice as I might need some help.

With the space created in 10 vs 10 soccer, the midfield did not pass the ball as much , going for longer passes and longer runs. Simon Dawkins , who went back to the center midfield later in the game, was the most dangerous player for the Earthquakes. Alone, he could not overpower for 90 minutes the Montreal trio even though ball possession was on the visitors' side.

It was expected to see San Jose have more of the ball with its systematic crosses in the box and even without Lenhard to put more pressure in the box. Still, the Montreal trio managed to keep the danger away as much as possible but always looking for the forward pass to take SJ defense off-guard.

Patrice Bernier , naturally and as per Marsch's instructions, went more forward and created a few chances including the joga-bonito tricks to setup Lamar Neagle for the second goal. 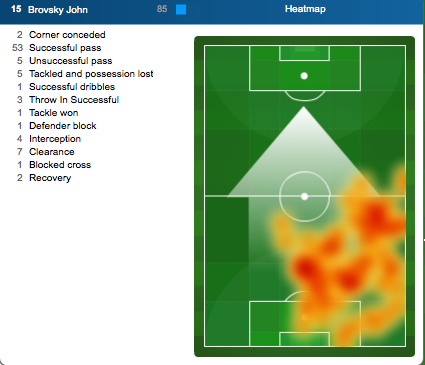 4 interceptions, 7 clearances, 1 blocked cross, 2 recoveries and a new area to cover as a hybrid CB-RB next to Matteo Ferrari. Jeb Brovsky continues to step up in his game as a complete athlete, a smart soccer player. He is able to mix agressive play with a clean attitude and has come a long way since the season opened vs Vancouver and the red card against the Columbus Crew.

If you had to choose one symbol of the ''E for Evolution'' program that the Montreal Impact is running, Jeb Brovsky would be that poster boy.

At the end, the team played a complete game from the goalkeeper to the strikers and we cannot talk about everyone but focused on some players/sectors. Jesse Marsch describes the great team effort that seemed to impresse beyond expectations and making him extremely proud.

Quotes from the game

Lamar Neagle in the locker room

Troy Perkins in the locker room