An electric and packed Stade Saputo '' welcomed '' the New York Red Bulls, the #1 ranked team in the Eastern Conference. A sell-out 19,441 fans filled Stade Saputo to cheer for the Impact as the home team continues to push for the 5th spot and the playoffs. After a harsh 3-0 defeat to the hand of the Houston Dynamo, the Impact recover well with a deserved 3-1 win over the Red Bulls that lined up Sebastien LeToux, Kenny Cooper and Thierry Henry.

The game started off slowly in the first half with some great chances for both sides. But it quickly picked up with 3 goals in the first 12 minutes of the second half. Goals from Marco Di Vaio and Davy Arnaud gave a 2-0 lead to the Impact early in the half. '' Titi '' cut the lead to 1 goal a few minutes later only to see Sanna Nyassi seal the deal at the 74th minute.

A sigh of relief from 19,441 fans was heard when Di Vaio finally scored his first MLS goal. We can also suspect a grin of satisfaction from Joey Saputo, Nick De Santis and Jesse Marsch to see Alessandro Nesta.

The post game talk and analysis continues after the jump

Not only did Alessandro Nesta play 90 minutes but Nelson Rivas and Matteo Ferrari played respectively 78 and 12 minutes. That depth at the center back position will be helpful for what is left of the season and you can include Hassoun Camara and Shavar Thomas in the mix.

Alessandro Nesta was typically simple and efficient showing his regular confidence as he directs traffic around the back line, next to the physical beast that Nelson Rivas is. Rivas continued to combine confidence and aggressiveness while showing off some Joga Bonito skills.

Nesta did not ask twice to get involved offensively with a few nice passes, including a key pass that started the play for Davy Arnaud's goal at the 50th minute. He once again proves that positioning before anything else is key for offensive and defensive phases. 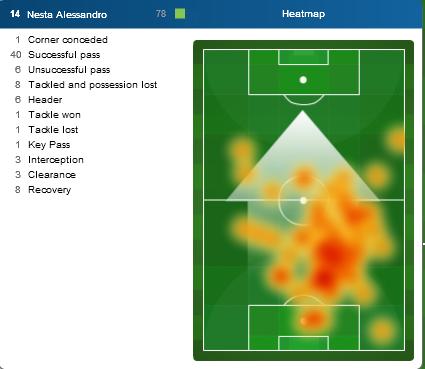 With 2 minutes between Di Vaio's and Arnaud's goal, it is not the first time that the Montreal Impact show a killer instinct in many of its games in which it took the lead. This time, the 2nd goal actually came and putting the pressure on the opponents is key to control the game. Even though New York cut the lead to 1 goal, Montreal continued to push and did not alter their intensity level or cool factor. It's almost like saying that Jesse Marsch is actually a good coach (god forbid someone says that) that commits his rookie mistakes.

It is no scoop that it is hard for Justin Mapp to play a full 90 minutes at high intensity and Jesse Marsch saw something when he took him out for Nyassi (at the 60th minute). Jan Gunnar Solli was giving too much space behind him all game long and was not the most aggressive defender out there. Putting Sanna Nyassi in would stretch out the Red Blls while bringing speed offensively and defensively.

Like in 99.99% of soccer/football games, honing on the other team's weaknesses is key and the Impact did just that throughout the game. Sanna Nyassi's beautiful goal , from setup to finish, was symbolic to that killer instinct.

4-4-2, 3-5-2, 4-2-3-1 . The Montreal Impact is still not fully mature to switch formations out of the blue but has some flexibility especially when the Bernier-Felipe-Warner trio is together at the same time. Earlier in the game, Felipe was not as dangerous but that loving feeling between him and Di Vaio came back in the 2nd half. The big difference in the game was the capacity of Montreal to stick to simple soccer that include one touch passing to destabilize the NYRB unit.
Marco Di Vaio feels automatically more comfortable playing alongside Felipe. Both understand each other and combine very well with many quick cheeky passes

Ricketts or not to Ricketts

Bush or Ricketts? Ricketts or Bush? It felt like a Montreal Canadiens debate of who should be the starting goalkeeper: a legitimate debate. Jesse Marsch quickly pushed away the idea that Donovan Ricketts will not be his #1 guy for the team. Evan Bush will get his chance but Ricketts still combined some scary wobbly saves with another Save Of The Week Nominee.
Legitimacy will have to wait next season.