Philadelphia Union 2 - Montreal Impact 1 : What is going on in Pennsylvania?

Share All sharing options for: Philadelphia Union 2 - Montreal Impact 1 : What is going on in Pennsylvania?

The Montreal Impact lost to the Philadelphia Union 2-1 at PPL Park. After conceding a late goal in the second half, the Impact equalized around the 90th minute, only to concede a late goal to the Union. It was an exciting, open game in which both teams did not hesitate to play offensively and going for it early in the game.

The Impact seemed to have more clear dangerous chances than the host team but close again and still no cigars. The ''inefficiency'' streak of Marco Di Vaio continues but still a positive performance to get and creating chances. But at this point of the season and with his current form, expectations around his goal scoring efficiency are at its highest points.

Set pieces defending continues to be a deficient department for the Montreal Impact after conceding the late winning goal off a throw-in (yes a throw-in). It hurts even more to see a defender, Carlos Valdez, fire a loose ball in the box and seal the deal for the Union. Both Union goals were suspect (for the Impact defence) and ugly in their finishing. Credit goes to Philadelphia for the creativity behind each goal but the nonchalance around the ball carrier or in the box killed the team.

Outside the defeat and the quality of the finishing on both sides, it was an interesting game to watch as both teams seemed very similar in style and form. Both have an advantage over the other which proved to be tactically exciting to watch.

More about the game, postgame comments and MLS standings implications after the jump

On paper, both teams seemed to be compatible to see an open game and that is what happened. The game had a good flow as both teams using similar tools to get the better over one other in different phases. The Union and the Impact enjoyed playing quickly with one-touch passing and both had chances by playing smart long balls behind the defence.

What made each team unique (or what gave them a competitive advantage) :

Not as decisive as he was before, Felipe Martins was still very present and very important as the last pass provider for the team, especially for Marco Di Vaio. He was able to find the generous spaces left by the Union, right in between the midfield and the defence. As you can see in the heat map below, Felipe was mostly focused at the center and not stretching out as much as in previous games. With Marco Di Vaio being such an active target, the connection between both players is at worst interesting, at best magical. 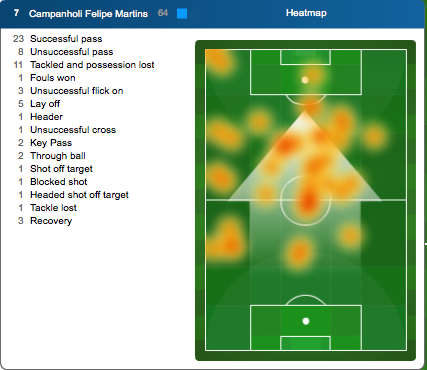 Related: The Union: A sneak peek at the Impact's next opponent | Follow Mount Royal Soccer on Twitter

The Philadelphia Union outside backs

Both Sheanon Willams and Gabriel Farfan were important deciding factors towards the Union's win over the Impact. Their constant runs on the sides helped to stretch out the Impact's defence while being dangerous on the attack. Combinations with super-sub Antoine Hoppenot , Jack McInerney and Lionel Pajoy was really a key factor in the team's success. That aspect of the game also opened the game for the Montreal Impact to be able to counter attack quickly when they recovered the ball.

Unfortunately, the Impact did not capitalize on the open spaces with goals with a few missed chances and some saves from Zach MacMath.

Marco Di Vaio is getting into the danger area by himself or through some nice passes from the midfield. When he scores, it will flow but until then Jesse Marsch will feel the frustrations of the what-ifs and what-nots of not taking advantage of so many clear chances. This is not a blame towards Marco Di Vaio but expectations are getting higher and so is the pressure.

Toronto FC and Sporting Kansas City will be thanked by the Montreal Impact by beating direct rivals , the New England Revolution and the Columbus Crew. On the other hand, the Union are only 1 point behind the Impact and Toronto FC 5 points away.

With the Houston Dynamo winning 4-0 against DC United, 5th spot seems to be getting further away from the lower pack. This only makes the next 2-3 games even more important and teams in the lower tier desperate. We talk about 6-point games from now on and every inch lost or won makes the difference.

We've got to figure out a way to stop literally handing points to other teams, otherwise this thing will get away from us," said Impact head coach Jesse Marsch. "We got a quick turnaround, so we have to figure out how to regroup and move forward."

It was a difficult result, but overall we had some of the better chances, especially in the first half,. We got to stop giving goals off of set pieces.

It was disappointing and frustrating.To give up two late goals like that, that they didn't really earn, is very frustrating. We had a chance to get points on the road and we let that slip away. It's unacceptable.

I think it's massive. When you can do that, it really changes the balance of things. You get back three points in the standings, but you take away three from your opponent, who is battling the whole time. We have a couple of games in hand over Montreal, so we've just got to keep plugging away and making sure we go after those points.

It's huge, it's huge. We're keeping an eye on what we're doing. Our destiny is in our own hands, for sure. Getting wins like this definitely keeps it that way. That's how we want to keep on going for the rest of the year

"I think we're right back into the mix now. We're only one point down and everyone else has 23, 24, 25 points. It's a good confidence builder for us, especially since we have a bunch of games in hand, we can build off this.

I think , a couple games ago, we knew it was still a long season, and that we had to play a lot of Eastern Conference teams . So (making the playoffs) is definitely doable.