Share All sharing options for: A Midday Outing at Stade Saputo: Media Visit

How about we start with some interesting facts about the stadium, the den of the Montreal Impact fans, a haven for the team and hell for opposite teams to come to.

More about the visit, Joey Saputo's press conference after the jump.....

We are met by Patrick Vallee (Head of Communications at the Montreal Impact) as he greeted the media and directed us the media room where Joey Saputo was going to give a press conference.

When asked about the latest rumours linking the Montreal Impact to Del Piero, Joey Saputo made it pretty clear

As per the situation with Del Piero, yes he was in Miami......I can tell you that Bernardo Corradi was also in Miami and I know that they both played tennis together..... our last discussions with Del Piero's people was in August of last year when the player's brother called us and confirmed that yes, he wants to play in the MLS but effectively in LA or NY. At that point, the discussions were over there.

Joey Saputo was not necessarily a fan of the question but expected it and was prepared for it and answered in a typical professional way, a professionalism that is important to the club and the organisation. He tackled the Bernardo Corradi contract situation answering the rumor that Corradi was going to leave the team at the end of his contract at the end of June. He quickly confirmed that both parties want to get to an agreement: the Impact want Corradi to stay and Corradi wants to stay in Montreal. It's more a question of time as the contractual details for the whole season were known by the player as soon as he signed with the club.

At the end of conference and the Q&A, Richard Legendre (Executive V.P with the Montreal Impact) took us to visit the Stadium as we enjoyed the nice architecture, the nice views from every spot in the stadium and a piece of architecture to make the fans and the city proud of its team.

Picture of the grass at Gazonniere Bastien 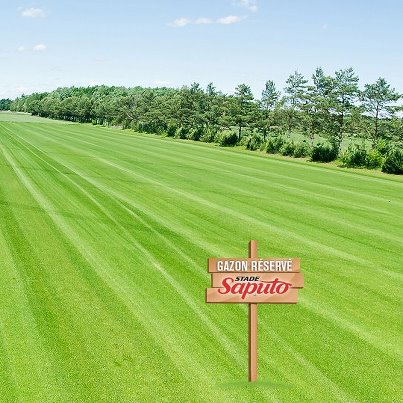 Slideshow of pictures during the visit