With eight goals scored in both home games at Stade Saputo, the Montreal Impact are really enjoying their renovated stadium. After taking care of business against the Seattle Sounders, any misconceptions of opening day confidence to explain that performance, the Impact took it the Houston Dynamo on a score of 4-2.

I personally expected to see a tighter game with both teams showing some strong technical features on every line but Sanna Nyassi's goal in the 4th minute opened up the hostilities quite early in the game. After a nicely constructed play from Rivas to Bernier, Felipe Martins ''nut-megged'' a pass by Geoff Cameron to feed Nyassi with a smart run. His shot was partly stopped by the Houston goalkeeper but the ball continued to roll on into the net.

Twelve minutes later, Brad Davies curled in gorgeous free kick from 20 meters or so but the action continued. The fans have barely started to settle back in and digest Davies' goal that Jeb Brovsky combined with Justin Mapp who delivered a high quality cross that met Davy Arnaud's header who overpowered a shorter Corey Ashe. The rest of the half was under control for the home team until a mental lapse saw a nice through ball by Brian Ching find a Will Bruin who ties the game right before the half-time whistle.

Usually, the team that scores at the end of the half seems to get the momentum and take it for the rest of the game. In this case, Jesse Marsch must have given some good positive reinforcement messages to his team and Montreal ran with the ball and were efficient. Hassoun Camara scores from a Felipe corner kick with a half-volley and it's 3-2 for Montreal at the 60th minute. Eight minutes later, Patrice Bernier finishes off the game from the penalty spot (earned by Felipe) and seals the deal at 4-2.

After the jump, we go into some detailed performances and interesting numbers.

Thank you to MLSSoccer.com for the excellent data and heatmaps via their Opta ChalkBoards. 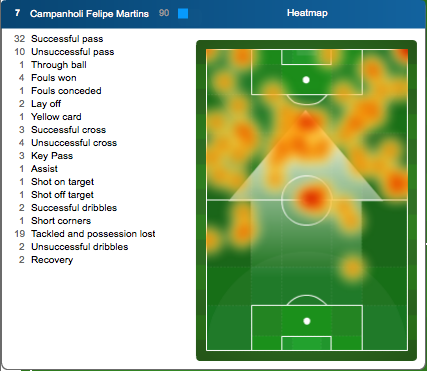 Since being liberated in the newly designed 4-2-3-1 against the Colorado Rapids, the 21 year-old midfielder has been key to the success of the team. Whether playing in a deeper position or upfront, he has delivered the merchandise and has been a real pest for whomever has to mark him and he doesn't stay put, making him unpredictable. Statistical maps do not give enough credit to Felipe's performance as watching him live is a delight. As you can see, he moves around a lot as a free electron with a focus in the center as the relay for Nyassi and the wide midfielders.

He moved on both side to propose a passing solution for Arnaud or Mapp but also became a sort of 2nd striker, jumping in the box with the ball, dribbling and challenging a tall/physical Dynamo defence that couldn't get a handle on him. He was also a pest provoking a few fouls and a red card after Adam Moffat tackled recklessly. (not sure it was a straight red card but referee's decision is also an appreciation).

Whoever is the mystery potential second Designated Player, keep the 3rd spot for Felipe because the young Brazilian midfielder will cost a lot when his contract is up, unless Europe calls his name.

45 successful passes for Collen Warner, 72 successful passes for Patrice Bernier. That represents 22.8% of total passes for the whole team. Warner is settling in a deeper position as the first defensive turret in front of Rivas and Camara and keeping it simple with crisp passing and awareness in his positioning with 2 interceptions.

Patrice Bernier plays the more complete all-around midfielder with much more activity in his passing, taking more risks offensively and joining the attack on a regular basis. Bernier has always had that offensive touch since his NASL Montreal Impact days and it shows that he is confortable in that position. A lot of pressure and expectations are put on him by Jesse Marsch and he is delivering the goods.

FLASH NEWS: Collen Warner and Patrice Bernier can play together on the same field...just saying :-)

A much better performance from Justin Mapp in this game as he seems to find a second breath later in the game and never stopped running. The same applies to Davy Arnaud who not only scores a gorgeous header but did not stop running up and down the right flank, putting a lot of pressure on Houston's left-side.

The Montreal Impact are not the Italian national team with an abundance of runs on the wing but vs Houston, it was an excellent display of movement and putting pressure on the other team and always keeping them on their heals. 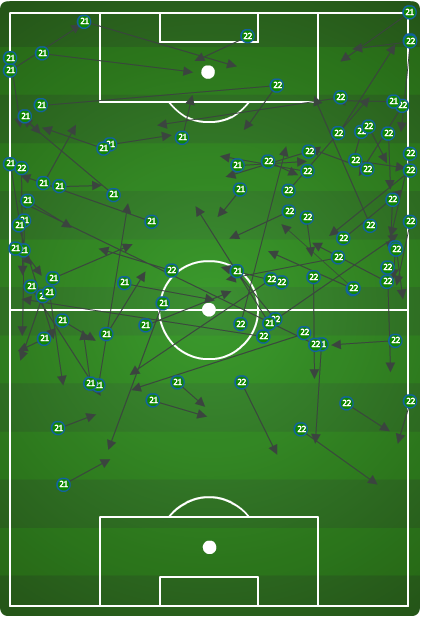 With Matteo Ferrari out for 4-6 weeks, Hassoun Camara has come in (again) and filled in a gap left by a Serie A and Champions League veteran. A natural central midfielder, he was tagged as a central defender by Jesse Marsch during pre-season. With the competition in the midfield, Camara will enjoy being called upon by his coach giving him big responsibilities. He was rewarded in his faith to the team as he scores a beauty of a half-volley off a deflection on a corner kick.

It's time for the Impact to focus on their next opponents, Toronto FC in a a home that will see Marco Di Vaio make his debut with the Montreal Impact. I can't even imagine the ambiance and the electricity in the air for that game. Stade Saputo is a fortress for the Impact and the team will hope to continue its winning streak at home.