Montreal Impact vs Seattle Sounders: What do the numbers tell us?

Share All sharing options for: Montreal Impact vs Seattle Sounders: What do the numbers tell us?

With all the talk around the Seattle Sounders, you would think that the Montreal Impact are facing one of the ten founding clubs of Major League Soccer. The Sounders have only been in the league since 2009 and have made the MLS playoffs since. You could say that it wouldn't be a bad idea for any current or future MLS team to follow the Seattle model, if it can figured out and translated into something concrete.

Let's take a look at team stats for both and see how they compare:

Follow us for some number crunching as we compare some sectors of both teams against each other...

With 16 goals , 1 more than the Impact, the Sounders offense would seem disappointing with the likes of Fredy Montero, Eddie Johnson and Alvaro Fernandez lined up on a regular basis. 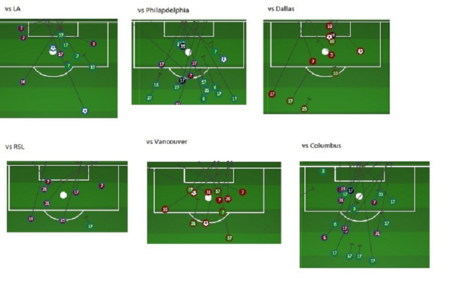 As we can see, in most MLS games in May 2012, the Sounders are shooting a lot from inside the box but still have peripheral shooting options. Inside the box shooting has included (on and off target) : 25 headers and 61 shots.

Those who continue to talk about Montreal having a porous defense should stop just watching highlights and look at box-scores and actually watch the games. Yes, late goals have been conceded by the team but as a whole, this expansion team has solid soldiers at the back with an interesting depth to pally injuries. 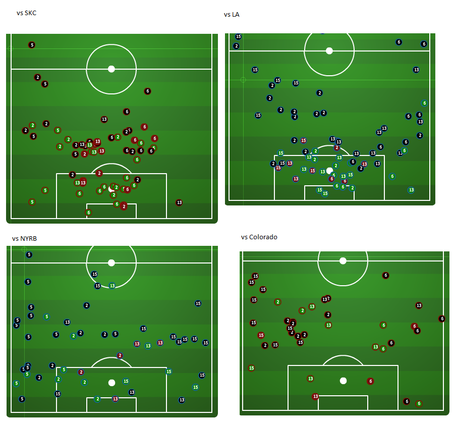 These chalkboards show the defensive stats for the Montreal Impact defense (back four at that game) including Tackle Wons, Interceptions, Clearances and Recoveries.The Impact defense does not mind the physical battle and Nelson Rivas and Matteo Ferrari enjoy going up high to meet the ball away from the box. This will sometime backfire if mistimed and it has happened a few times where the opponent`s center forward beats his marker for the header and creating gaps behind the Montreal defense.

With Estrada out of a few months, his versatility will be missed but the Sounders have options. Eddie Johnson can continue to pay upfront as the lone striker with Montero playing behind him as a link between the midfield and Johnson. These independent runs by Montero might create more gaps between the Montreal lines and this is where the midfield comes into action.

Even without Estrada, the options are there for Seattle. Known to be strong on the side, that tradition continues with Mauro Rosales and Alvaro Fernandez running up and down the sides with some technical abilities that can make any team suffer. Evans and Alonso will take care of the ``defensive `` aspect of the midfield but we are not talking about pure defensive work as both can actually play soccer and just recover the ball and give it to Rosales and Fernandez.

This is where the battle starts. With the re-shuffling of the midfield after the positive performance of the trio of Felipe Martins - Patrice Bernier - Collen Warner against the Colorado Rapids. Bernier and Warner can take of the defensive grunt work but offer excellent starting block to begin to attack as both offer a good first pass, excellent vision and intelligence in their game. This combination will liberate Felipe Martins to play in a more forward position and hopefully do some damage. That experiment was very interesting and many Impact fans want to see it again.

This game will be very interesting and the numbers tell a story but only the pitch will show the truth and speak it.