From the excitement of the owner Joey Saputo, the translating skills of Nick De Santis to the optimism of Jesse Marsch, the obvious pride and happiness surrounding the team is showing and glowing on the leaders of the club and organisation. From beginning to end, the same theme of team, unity, family and professionalism came back throughout the conference which shows a compatibility between the player and the club. Throughout the press conference, I sincerely felt a real connection between the player and the club in the way outside the regular professional relation and Joey Saputo never stopped emphasized on the family side of the organisation since 1992.

It's an exciting time for the city of Montreal, the Montreal Impact and the fans. After a great reception at Dorval airport of Di Vaio by 200+ fans, all Impact fans are rewarded for their faith and loyalty towards the team by a gift always promised by Joey Saputo: a star player in MLS.

The very interesting and un-usual thing with the press conference was the fact that it was bilingual. Montreal is used to the bilingual aspect of press conferences in the sports world but this time, Italian took over English and French had a big part in this '' Moliere '' play. Marco Di Vaio was able to express himself correctly in French answering a few questions in French and a lot of them in Italian.

For our team, I think he's the perfect fit. We need somebody in the attacking third that can make sense of things and ultimately score goals. He's an incredibly intelligent player.

The Impact head coach says it like it is and in the only way he knows. There is a need in the attacking third for the team and Marco Di Vaio's profile fits perfectly for what the team needs. Having built a strong team from the back (Ricketts, Ferrari, Rivas, Camara) with a cohesive midfield, a few points and games were lost from not being able to score with more than decent chances. Those half chances that are currently not going in can easily go into the net with the skills of Marco Di Vaio. With a shoot-first ask-questions later attitude, he will bring that extra spark for the team. As an experienced player, he will make players around him better from veterans to young players and should adapt to the team quicker than we think. 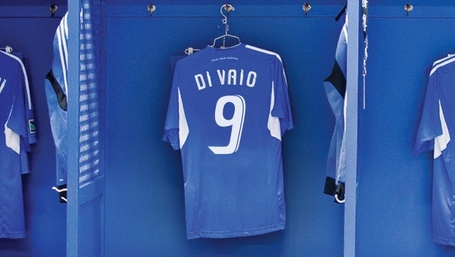 Should I say more? The arrival of Marco Di Vaio's will have a tangible effect on the team's finances. Outside the salary requirements (approximated to 1-2 Million $ per year), Marco Di Vaio will bring some sought-after marketing dollars into the Impact's coffers. The jersey mania has already started in the streets of Montreal with Marco Di Vaio Impact jersey popping left and right and twitter questions to @impactmontreal as per where to get the jersey and how fast can they have the sweet #9 on it.

Attracting an Italian star, a recognizable Serie A player is an important aspect for the team. With a strong and big Italian population that follows soccer back in the homeland, the excitement of seeing one of their boys come to North America, come to Montreal, can only make the hype grow around the team. Summer dollars are big dollars in the sports market and the Impact have just taken a big bite out of it.

Beyond the marketing and sporting aspect, Marco Di Vaio has expressed himself as humble and simple person with some signs of shyness. The Montreal Impact have always surrounded themselves with players with the right kind of attitude, work ethics and personality. Di Vaio is filling every check box in the form of Expectations that Joey the fan had, Nick the Director did and Jesse the Coach is eager to see.

Something nice and touching that I noticed was to see his family in the front row and how many times Di Vaio was looking at them and smiling at his young children. He is not coming alone to North America for a new sporting challenge, new records, personal stats and maybe titles but he brings a family that he wants to see grow by his sides as he joins his newest family in soccer, The Montreal Impact.

I couldn't say it better than the Impact fans at the airport '' Marco Di Vaio, segna per noi ''