David Beckham was in town and 60,860 fans made sure not to miss star soccer player, a stardom that goes beyond the game. The Montreal Impact are still unbeaten at home and don't miss the road trip blues that the team had to go through earlier in the season. Home sweet home was the best recipe for the Impact to find stability and energy from a crowd that electrified the game.

That electricity translated into energy and Davy Arnaud did not ask twice as he breezed past the LA Galaxy defense and crucified Brian Perk for a quick lead int the game. Outside a few good chances in the 1st half, the 81+ minutes left in the game were all Galactic led by David Beckham who had Landon Donovan and Robbie Keane as premier targets. A few free kicks later, David Beckham delivers one of his classical free kicks and ties up the game at the 62nd minute.

Throughout the game, we saw a much stronger team (LA Galaxy) set the tone most of the game that faced a home team known for playing hard, physical while still being able to be dangerous offensively. It does not mean that the Montreal Impact will win the MLS Cup or such but if the resolve and unity of the team was not tested then, I don`t know when it will.

There isn`t really much to say about that amazing free kick even though we have been seeing for 15 years by David Beckham. It was disappointing to see Impact fans (we assume with the scarfs and painted faces) cheer for David Beckham`s goal and Zarek Valentin also expressed his feelings about that 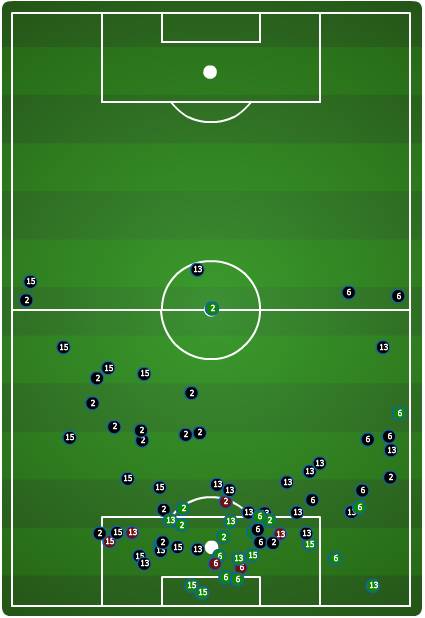 The defensive line was much more aggressive in the first half with Rivas, Ferrari and Camara meeting the ball much closer to the midfield but the LA Galaxy talent took over and made the Impact stay closer to their box and defend. The defensive showed true character by being aggressive, quick, athletic and desperate when needed. A purple heart goes to Hassoun Camara who played the last 10 minutes of the game with an apparent leg injury and could barely run. He prevented a guaranteed goal with a diving header to take the ball away out of danger in the last minutes of the game.

As much as Ricketts had his share (deservedly in some cases) of critics with some missed saves and butter finger moments, he showed why he was not so long ago voted MLS Goalkeeper of the Year and why Jesse Marsch has put so much confidence in his Jamaican International, having played every game in MLS and the Canadian Championship. With 6 saves tallied officially in the game, we can expect to see one of them to be nominated for Saves of The Week by MLSSoccer.com, and probably this sequence

ps: I really enjoyed seeing Ricketts jump over a falling Beckham to position himself to make his second save on that sequence against Robbie Keane.

Offense and the Midfield

Offensively, the Montreal Impact relied once again on a team concept to generate their chances with Bernardo Corradi playing again the central offensive pivot with Davy Arnaud as the second striker. Davy Arnaud seems to a better option (for now) to play the second striker role with a distinct physical impact on the other team bringing in some speed, height and relentless effort. he never stops running and seems to be fueled by the crowd and is just loving the Olympic Stadium carpet scoring his 2nd goal of the season and at home. Bernardo Corradi was able to find him many times but as soon the LA Galaxy took over the game, both strikers were mostly running around and pressing the LA defense.

On one side, Justin Mapp was very invisible but still battled hard but his best game but he just recovered from a leg injury. On the opposite side, Lamar Neagle has probably made himself a regular starter with an excellent effort defensively with some good offensive moments. The Tacoma,Washington native has only made Jesse Marsch's job much harder.

In the central midfield area, Felipe Martins and Collen Warner were very solid early in the game overtaking Beckham - Juninho but that only lasted a big chunk of the 1st half. Felipe was named Player of the Game and deservedly as the Italo-Brazilian really showcased his holding midfielder skills by breaking up a few plays and as soon as he went forward, the team felt much more comfortable in setting the tone in the first half.

It's baby steps for the Montreal Impact as the expansion team continues to improve. As different challenges come their way, the team has been able to adapt to their opponents and also learn from their mistakes. With back to back games at home, the Impact host the New York Red Bulls coming to Montreal with 4 consecutive wins.