The Western game between the Vancouver Whitecaps and Edmonton FC will decide 1 finalist but we will focus on the 1st leg of the Eastern battle: the Quest for the Voyageurs Cup. Click here to read Mount Royal Soccer answers to Waking The Red questions

We ask Waking The Red

1. As the Montreal Impact has learnt from its harsh defeats in its first 8 MLS games, do you think that Toronto FC is learning from its losses? There has been a noticeable evolution in TFC's game. Is there hope for the team evolving or will MLSE pull the plug and re-shuffle staff and players?

I go back and forth on pretty much all these questions on a regular basis. Are they learning? Yes, in a way, it certainly seems as if they're trying to learn as almost every game there's a slight tweak to the lineup of formation as if to fix what's going wrong. But also no, it seems like management isn't learning as it can definitely be argued that the constant tweaks and changes are hindering things, with the unfamiliarity and confusion leading to a lot of basic errors that have been killing off TFC in almost every game, ie Terry Dunfield's mishap for Montreal's first goal last month. The players may not be good enough, and the formation might not work out, but it wouldn't hurt to run the same players out in the same formation for a few games when possible to take away the unfamiliarity excuse. 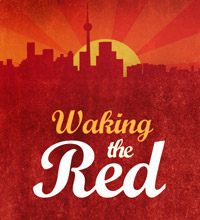 Is there hope or will management pull the plug? I'd say there is hope, there are certainly some good signs here and there, especially when it comes to the attack which is clicking much better in the last couple of games. part of me thinks that MLSE are ready to stay the course and get through this tough spell, and hopefully things will improve. Another part of me thinks there's no way MLSE has the patience to sit through a growing media shitstorm and supporter unrest, and unless results come quickly, they'll make a change.

2a) Eric Avila looked great against Real Salt Lake and so did the team as TFC produced a solid performance. Is Aron Winter ( even though historically short) brave enough to go with best players that he evaluates being the best instead of going for the classical safe choices?

Aron Winter is very much his own man, and doesn't seem to like to have compromise pushed on him, so I think he'll continue playing this formation and style. The problem is is that we're still very much trying to fins out just who are the players that can play that style. He does seem pretty ruthless about making changes if he's not impressed, which sometimes doesn't help, for example in defence we've gone through many different central pairings already. Avila is someone who most people thought would be in the team to start the season, but he was nowhere to be seen for a while. He's had a couple of good performances in a row now, but i don't think anyone would have seen him starting out on the Left Wing in place of Joao Plata. It worked very well, so more than likely we'll see that again.

2b) TFC's main problems have come a lot from the defense but those mistakes seem workable. Is there a belief in Winter's ability to adjust to what his players can offer him?

Not really no, that seems to be the big criticism of Winter, that he's doggedly sticking to his plan and waiting for the players to adjust, rather than acknowledging that they're a bit out of their depth and making the compromises necessary to flourish within MLS with it's salary cap and the imperfect solutions that you have to come up with. His one tactical variation seems to be moving Torsten Frings back and going from 4-3-3 to a 5-4-1/3-4-3 depending on how confident he is in his defenders

3. Is the 2012 Amway Canadian Championship a haven of peace and familiar grounds with a great run in the CONCACAF Champions League? Can we expect a much more aggressive TFC team since both teams played at the Big-O in MLS action?

I think everyone will be happy to get away from MLS for a couple of games, but that big 0-7 is still going to loom over proceedings and specifically over Aron Winter's head. Speculation and calls for his dismissal are getting louder, and if a week from now TFC are still winless in the league and also out of the Voyageurs Cup, then I think that will probably be it for Winter as the head coach (though I'd guess at him getting shuffled upstairs rather than outright fired). There should definitely be a more aggressive TFC team than we saw at Easter, just due to that need to win, combined with not having to fly out from Mexico like last time. I'd expect more or less a first team that's seriously trying. If that will be enough is anybody's guess.