Welcome to our first tactical talk piece, a first piece part of a series in which we will discuss soccer tactics from what we see on the pitch by your Montreal Impact. Jesse Marsch has shown through his experience, education and behaviour that he is a very intellectual person. If you take the time to listen to him , he will pretty much tell you what he expects from his players and what style of play he wishes to see on the field.

Quickly settling on a 4-4-2 as he took over the team, Jesse Marsch seems to put a lot on importance on covering as much space as possible to almost asphyxiate the opposing team. As seen in the pre-season tournament in Orlando, Montreal is a team that will press very high on the opposite team's defenders and not allow them a lot of time and space to deliver that important first pass.

A workhorse like Justin Braun will be important in that pressing role with Sanna Nyassi at his side. This does not mean that attacking duo has all the defensive duties. The midfield is obviously key to any soccer battle, games are won and lost in the midfield. An aggressive centre back duo will be important as you will see Matteo Ferrari, for e.g., be very aggressive on his man , even going for an aerial ball 10-15 meters away from his defensive zone.

More on the Montreal Impact's set-up and how Jesse Marsch adjusted in the game versus the Chicago Fire without changing his soccer beliefs, system and philosophy.

There is nothing better than watching a game live, a situation in which you can truly enjoy the game and appreciate the precise passing, ball control (or not) and the speed of the game. The isolated physical battles that you see between a Centre Forward and a Centre Back are always fun to watch, as one tries to win that piece of land and the other to protect it. To be honest, I could have put Josh Gardner much higher as he spend a lot of time around the midfield line. In a 4-4-2, the importance of the fullbacks or outside backs is critical for offensive support. They are usually given the freedom to go into the last attacking 1/3 to offer a solution to the midfielder to suck in a defender with him or to get the ball for a dangerous cross into the box.

We will analyse player positioning via the excellent MLSSoccer.com chalkboard. You can make your own after every game, follow the link and enjoy. 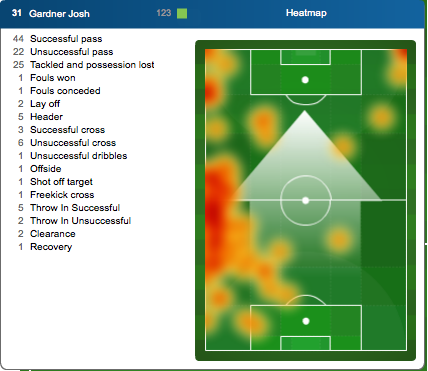 As you can see, Josh Gardner is a busy body as you can see a strong concentration in the midfield area, always ready to give support to Justin Mapp and then to Lamar Neagle. He possesses an strong left foot for precise passing and crossing including being a good corner kick taker. Josh Gardner enjoys running up and down the left side which proves a knack for attacking and an excellent stamina. 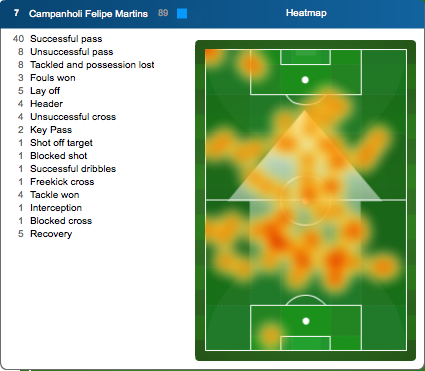 The Felipe Martins - Patrice Bernier combination is key for ball control, ball distribution and being the first line of defence for the Montreal Impact. As Jesse Marsch said after the Vancouver game, he expected the passing and decision making to be quicker, faster, better. Both Felipe and Bernier will have similar roles and field coverage with Felipe being more of the play-maker of the 2 but Patrice Bernier does enjoy going up and giving options to the side midfielder and striker in the zone that he is in.

A key point in the midfielder duo is the capacity to go up high and get in the last attacking 1/3 to outnumber the opponents: Felipe Martins did just that, especially on the Montreal's goal. His run on the goal was the game breaker for the team as he took on full speed a static Pavel Pardo, sucking in the Chicago defence towards to release a quick ball to Sanna Nyassi and the rest is history. The heat map shows the box to box coverage of Felipe with good defensive numbers and 40 successful passes

We saw in pre season Felipe's offensive skills while still being able to play strong defence. Officially at 5'9 ( he seems shorter than that to be honest), the smaller Brazilian-Italian midfielder is a great find for the Montreal Impact. 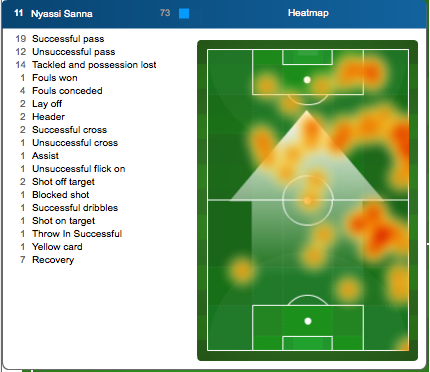 Sanna Nyassi starting the game alongside Justin Braun in a ''support striker'' role, roaming around Justin Braun to find 1-2 combinations and make runs at the Chicago Fire's left back. He did not have the effect wanted and the physical impact needed to pass a physical/strong Chicago Fire defence, that also not slow. He had trouble putting himself in shooting positions. The turning point of the game was Sanna Nyassi being switched to a wide right midfield position and Davy Arnaud playing the role of the second striker. Nyassi pretty much ran the whole right side most of the game from defence to attack, building up speed over a longer distance, making runs and providing crosses. He was totally spent a bit after the 1-1 mark as he had to go up and down the right side.

Justin Braun: More time in the box but not enough 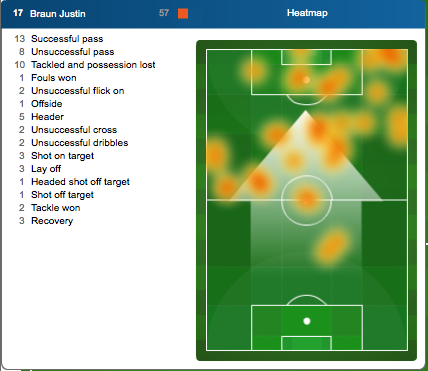 Justin Braun is the workhorse upfront as he will continue to run all over the field to press, press and press. A disadvantage of his constant pressing is his lack of time in the box. He enjoys breaking off on the sides to get the ball and give it back to his team-mates but Jesse Marsch will want him a bigger presence in the box. He battled strong against a physical and strong Cory Gibbs , almost a battle of giants.

You see through the heat map that Braun is scattered around the offensive zone looking for the ball and pressing on Chicago. Jesse Marsch will still expect a strong pressing as per instructions and the characteristics of the Montreal Impact 4-4-2 .But he will also continue to ask more box presence from Braun. Having Bernardo Corradi in the squad will not be a bad learning experience for the Salt Lake City native.

Jesse Marsch continued playing attack even after Chicago tied the game. Still keeping a 4-4-2, with Andrew Wenger and Bernardo Corradi up front later in the game, it's good to see a coach with convictions that show when he talks and show on the pitch.

I hope you enjoyed the first tactical piece. I could have covered every player via a heat map chart but it would have made the post extremely long but probably still fun :-). Please give in your comments and let's talk soccer!!