Some might say that the harsch reality of playing at a higher, stronger, faster level comes crashing on you quickly. That affirmation has proven itself true with where 2 mistakes by the Montreal Impact cost them dearly. The Vancouver Whitecaps did not ask twice and gladly took advantage of the mistakes and building up an offensive momentum. The classical Van-Mtl rivalry , going on since the USL days, has just been taken to a higher level in Major League Soccer. As much as 80% of the media predicted an easy Vancouver win, the Montreal Impact did not look ridiculous and out place in a League of Men, au contraire.

Kudos to RDS/TSN coverage of the game with on-site staff with interviews and sounds of the game. A special kudos to RDS with a good pre-game show. Back to the game.

The first 3 minutes of the game saw an agressive Montreal Impact that went at the Vancouver Whitecaps, not giving time to their opponents to settle into game: If only games were decided within the first 3 minutes. A defensive mistake by Tyson Wahl who mis-timed his intervention and maybe an overly-agressive Matteo Ferrari on Eric Hassli gave a 1-on-1 for Sebastien Le Toux and he made it 1-0 at the 4th minute of play. That quick goal must have unsettled the Montreal Impact and any coach will tell you that they would avoid an early goal any change they can get. There were moments in which Vancouver backed up and Montreal took control with their best chances of the game: the BC Place crowd has some cold sweats not just cheers.

Goalkeeper: As much as Montreal Impact would have liked for Donovan Ricketts to win his duel vs Sebastien Le Toux, the Jamaican was most probably more shocked than anything to see Le Toux get so quickly in front of him. He seemed to hesitate whether to fully challenge the frenchman and almost had a piece on that shot. Ricketts was solid as expected and made key saves, especially when he diverted a sure goal into the goal post with his fingertips.

Defence: Josh Gardner was much less offensive than usual, a left back that enjoys going up and deliver some nice crosses into the box. He did his best against Young-Pyo Lee and managed not to give too many gaps behind him. He was a tad weak in Vancouver's 2nd goal as he should have been firmer to block the slaloming Camilo. Jeb Brosvky played an honest game, making up some positioning lapses with his quickness and willingness to never give up. He is obviously not a right back to play against players of the caliber of Chiumiento.

The Matteo Ferrari - Tyson Wahl duo showed good things throughout the game outside the mistake on the first goal. Whether it was only Tyson Wahl that should have zone covered Le Toux or Matteo Ferrari over-committing on an aerial ball against Eric Hassli, this is a learning experience for this duo. Both were able to manage the physicality of Eric Hassli and did not look lost to challenge the technical side of Hassli and Letoux. Special mention to Matteo Ferrari ,who at 70-80% of his capacity, showed good signs of progress in the game with a strong aerial game , timely tackling and a good first pass.

Midfield: The Felipe - Bernier, brain trust of the team, were not effective enough (at least not long enough) in creating offense for the team, especially Felipe Martins. Patrice Bernier saw quickly that his pace would not be his strength, at least early in the season. As soon as Bernier went with more short quick passing, the midfield felt oxygenated.

As the right midfielder, Davy Arnaud was extremely combative throughout but showed some nervousness and extra-eagerness early in the game but channeled his nerves with high good pressing. He had an excellent header from a corner kick saved on the line by Young-Pyo Lee.

As the left midfielder, Justin Mapp has a good left foot and is a very smart player, that uses a change of pace to find space. His pace was also his weakness in this game and could not accelerate enough on the left side to find gaps against Lee, not an easy task but not enough to challenge the South Korean. His inability to let go of the ball fast enough led to Vancouver's 2nd goal. With some absence in pre-season training (for personal reasons), Justin Mapp might get his legs back as the season goes on.

It is a challenge to play a 4-4-2 with 2 side midfielders that are not known for being extremely fast and with little offensive support from the fullbacks. There were some interesting combinations when Montreal decided to overload one the right side with Mapp and Arnaud combining with Sanna Nyassi to create a numerical superiority that create good chances. Jesse Marsch will still expect more from his central midfielders, especially Felipe, by participating more in creating the offense in a more natural way, not just on burst-like phases.

Attack: As expected, the last third of the Montreal Impact will be its biggest challenge. Justin Braun is not the sexiest player or the most technical but he will work his behind off. Playing the pivot with Sanna Nyassi roaming around him, Braun was alone in an island and did his best to keep the ball and pass it on left and right to his supporting cast. Playing 2 up front gives more than just an offensive option. A 4-4-2 will give the team a chance for a more wide spread pressing to prevent the opponent's defence to build from the back.

Nyassi was the MVP for the Montreal Impact and showed why he was an excellent expansion draft pick. The Gambian International was much better as a pure winger (especially on the left) in the second half and even enjoyed helping out in the midfield. His finishing was disappointing as he shot high and wide in an almost point-blank situation but he did pivot remarkably to get himself in that position. His pace is beyond precious.

Andrew Wenger and Mike Fucito came in later in the game. Wenger showed some good pace but not enough time to make his mark but he did not look like a lost lamb. Fucito came in but was not noticed outside some fouls. With the Montreal Impact controlling the ball at the end of the second half to get a goal, Fucito was not in a position of running behind defences and finding the gap. Hard to do so when the Vancouver Whitecaps were staying back to preserve the shutout and the win.

Some negative and a lot of positives for a team that has only practiced together as a unit for 7 weeks. This is a testament of a chemistry that settled in quickly but a lot of work and details will be worked as practices continue and games are played. Stay positive and enjoy the games. This will be a fun ride.

Via MLSSoccer.com, here are some box score stats to give a taste of some data surrounding the game 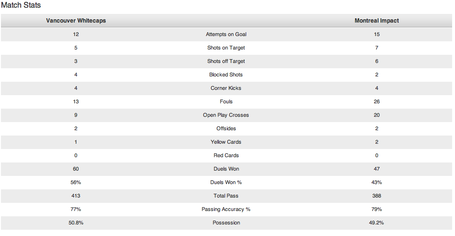