Is it time already for the 2012 post-season post-mortem ?

Let's ask ourselves the question again. Is it time to forget about the 2012 MLS playoffs for the Montreal Impact?

Share All sharing options for: Is it time already for the 2012 post-season post-mortem ?

Looking at the standings, games left to play and possible combinations, the future is bleak as per MLS playoffs hopes. But nothing is over yet until mathematics and algebra have said the contrary.

Jesse Marsch is the eternal optimist and whether he fully believes in that previous statement or not, is not as important as the mentality that has driven him as a player and as a rookie head coach.

Do I feel like writing drafts of post-mortems, planning end of season threads, player reviews and more?
Not really.

Is it realistic to be extremely confident now to see the Impact make the playoffs?
No to that also.

Can the Montreal Impact squeeze in? 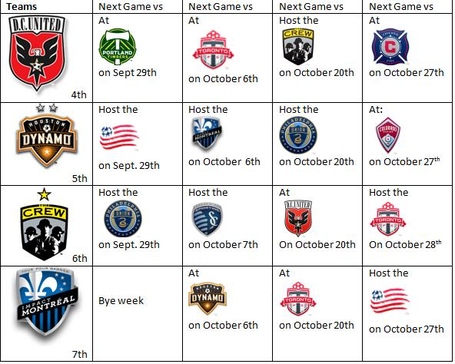 A quick glance at the schedule shows a distinct advantage to the Houston Dynamo and the Columbus Crew. Three out of the four games lefts for these 2 teams will be played at home, a factor not to be taken lightly.

D.C. United is playing 3 games out of 4 away from home but get a break by playing two ``inferior`` opponents in the Portland Timbers and Toronto FC. It does not guarantee victories but a united D.C team must feel good with a potential 6 points before taking on Columbus and Chicago.

The Houston Dynamo has not lost yet at BBVA Compass Stadium in 2012 and hosts three weaker teams (including the Impact) before finishing off the season at Colorado. Is it implied in everyone's mind but anything short of 3 points and the Impact playoff hopes are gone.

In a bye-week in MLS action, the Montreal Impact can rest , watch and observe Houston, D.C and Columbus play their games. Jesse Marsch will not mind rooting for the Timbers, the Revolution and the Union if it can help his team in any way, shape or form.

In totally honesty, I am not a big fan of the Amway Canadian Championship and, by transference, the CONCACAF Champions League (CCL). I believe 100% in a club`s capacity to play in different competitions giving chances to younger players and eventually implement a squad rotation. The 19th MLS franchise is not deep enough to play in 2 major competitions (MLS and CCL) yet but this might change in 2013.

The Impact's mentality is of a winning one and the CCL has put the club on the map during the infamous quarter-finals against Santo Laguna. So, I will not forget what an integral part of the Impact history the CCL is. 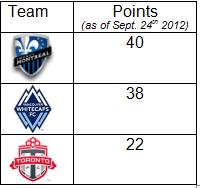 The un-official Canadian ranking in MLS is important to see who will have an easier time to get to the 2013 Amway Canadian Championship. The highest Canadian club seed in MLS will automatically meet Edmonton FC (automatically ranked 4th being in NASL).

What happens if the Montreal Impact win in Texas in 2 weeks? What if neither D.C. United, the Houston Dynamo and the Columbus Crew lose their next games?

Leave a comment and answer our poll and tell us what you think.